As part of our series ‘Voices for Animals over the Years’ in this article we profile Henry Bergh, the founder of the American Society for the Protection of Animals.

Bergh was born to wealth in New York City. His parents were Elizabeth Ivers and Christian Bergh, a ship builder.  As a young man he attended Columbia College in New York, but never completed his degree, instead travelling to Europe, where he dabbled in the arts and attempted a career in writing. In 1836 he married Catherine Matilda (née Taylor) and after his father’s death in 1843 he was rich enough to become a man of leisure, and he and his wife moved to Europe, where he wrote several unsuccessful plays.

In 1863 President Abraham Lincoln appointed him to the American Legation at the court of Czar Alexander II in Russia. While in Europe, and particularly in Russia, Bergh witnessed extreme abuse of animals, which was commonplace.   At that time life was extremely hard for animals, and they had absolutely no rights or protection.   To see the way animals were treated, particularly horses who at that time were the main mode of transport and visible everywhere, made Bergh very sad.   While he was in Russia, whenever he noticed a peasant beating his horse he would step between the abuser and the animal, and command that the beating stop at once.  In this simple and courageous way he began his journey speaking out for the rights of suffering animals, and encouraging others to do the same.

On his way back to the United States from Russia, Bergh stopped in England where he observed the work of the Royal Society for the Prevention of Cruelty to Animals, and he became determined to form a similar organization in America. Once home he began to talk to people about animals’ rights, enlisting the support of many influential friends.  Because of his contacts, people skills and his own money, he was successful in getting the first animal protection laws in America passed.  In 1866 he and his supporters formed the Society for the Prevention of Cruelty to Animals, generally known as the SPCA.

The idea that animals had rights was laughable at that time, but Bergh and his followers were passionate.  They gave speeches on street corners, raising the awareness of the public, who began to be see that to treat animals cruelly is morally wrong.

Through the fledgling SPCA’s outreach, city dwellers also came to be aware of the suffering, not only of overworked and exploited horses drawing carriages, but also of farmed animals.  Out in the country dairy cows were suffering.  Many were half-starved, and were living in filthy barns.  As a result of their advocacy for dairy cows,  Bergh and his followers succeeded in getting regulations passed that dairy cows had to be well fed,  and were to be given decent shelter in clean barns.

Bergh fought for the rights of not just horses and cows but also of dogs, sheep, and other animals. He believed that all animals were important, including those on their way to slaughterhouses.  An empathetic and caring man, he later extended his concern to abused children, being instrumental in the founding of the Society for the Prevention of Cruelty to Children.

When Bergh died in 1888, he was greatly respected. His life had been devoted to improving the treatment of the most innocent and helpless – animals and children.    Today the ASPCA carries on the work of its compassionate founder Henry Bergh, friend of all animals. 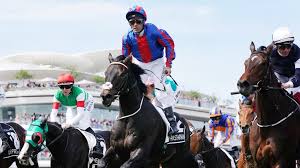 In the 2019 Melbourne Cup held this week second placegetter New Zealand jockey Michael Walker ,(seen in featured photo), was fined $10,000 and given a riding ban for over-whipping his horse, Prince of Arran. Using the whip in thoroughbred horseracing has come under increasing criticism in the past few years.  The general public see the jockey thrashing an animal and feel uncomfortable, but the Industry defends the whip, saying it is necessary to control the horse, and it ‘doesn’t hurt’.

Back in 2012  veterinarian and Professor Paul McGreevy at the University of Sydney led an observational study  on whip use by jockeys in thoroughbred races by The Australian RSPCA.    The findings of the Study were:

The results of this study did not offer any support for the retention of whipping in horse racing, and the way it is used is contrary to the International Agreement on Breeding, Racing and Wagering to which the Racing Australia Board is a signatory.

What do the results of the 2012 study mean for the ongoing use of the whip in racing?

The outcome of this study shows that the improper use of whips is commonplace and that it is impossible for stewards, using the technology currently available to them, to effectively police the rules surrounding whip use in Thoroughbred racing. Only through high quality, high speed vision is it possible to see exactly what is happening and unfortunately stewards don’t currently have access to this footage.

What is the issue with backhand whip use?

This study reveals that backhand whip use is far more common than anticipated by Australian whip rules. It is possible that jockeys have been encouraged to use backhand rather than a forehand action to avoid penalisation. There is no evidence that backhand whippings are less painful. It is important to note that there are no restrictions in whip use with either forehand or backhand actions in the final 100m of races.

What is the issue with striking the abdomen with a whip?

Striking the horse in the abdomen, also referred to as the flank, is likely to be more painful to the horse than a strike on the hindquarters because there is little muscle in this area to absorb the impact of the whip. The flank also extends to the stifle joint and is extremely sensitive and vulnerable to injury. For this reason, strikes to the flank are prohibited under international racing rules.

Australia is signatory to the International Agreement on Breeding and Racing which lists specific prohibitions for whip use, including using the whip on the flank. The results of the current study indicate that Australian racing authorities are not meeting their obligations under this International Agreement.

The British Horseracing Authority does not allow whips to hit the abdomen, which means that less than 25% of whip strikes observed in this study would have been acceptable in the UK.

Perception is a powerful thing on the part of jockeys who may feel a change in the horse’s stride when it’s whipped and on the part of owners and punters who correlate whipping with getting the most out of a horse. There is no agreed line within the industry as to why whips are used at all – it’s cultural.

What is a padded whip?

So-called padded whips have a shock-absorbent layer between the inner spine and outer sleeve. This is intended to provide a cushioning layer between the horse’s body and the hard inner spine of the whip. The padding does not extend along the full shaft of the whip – only for about one-third of the whip’s length. The claim is that such a whip “will cause less pain and less damage to the body being struck” compared to a conventional whip, however there is no evidence to support this argument.

Padded whips don’t cause pain, so what’s the problem with using them?

So-called padded whips do cause pain – they may be less painful than traditional contact whips when applied in exactly the same manner. But jockeys wouldn’t use them if they didn’t inflict some pain on the horse. In fact, this study found that in 64% of impacts, the unpadded part of the whip came in contact with the horse. It may be that jockeys are using the so-called padded whip in a different way to overcome the possibility that it has less impact on the horse.

What does a horse feel when it is struck with a whip?

There is no evidence to suggest that whipping does not hurt. Whips can cause bruising and inflammation, however, horses do have resilient skin. That is not to say that their skin is insensitive. Indeed, a horse can easily feel a fly landing on its skin. Repeated striking with a whip (of any type) in the same area of the body has the potential to cause localised trauma and tissue damage, the extent of which will increase with the force of the strike and the number of repetitions.

Whips are essential for jockey safety, or to make the horse ‘pay attention’, aren’t they?

Jockeys aren’t whipping their horses in the last 100m of a race to increase safety or to remind their horse to pay attention. If jockeys didn’t need to use the whip before that point for safety reasons then why suddenly pull it out at the end?

Bringing safety into the argument is just an attempt to distract people from the real problem – that last 100m where whips can be used indiscriminately.

What are the Australian Racing Board whip rules?

At the time of this study there were no restrictions on backhand whip strikes at any stage of a race. Following changes made on 1 December 2015, the ARB whip rules now state that jockeys can use the whip in either a forehand or backhand manner only five times before the final 100m of a race, however these are not to be used in consecutive strides. During the last 100m of a race, whips can be used at a jockey’s discretion, which essentially means horses can be whipped most when they are at their most fatigued and least able to respond.

What does RSPCA want next?

The RSPCA wants reform of the whip rules and an end of the use of the whip as a performance aid altogether. The study also confirms that there is unacceptable use of the whip in Thoroughbred racing and that stewards are not properly resourced to police Australian whip rules.