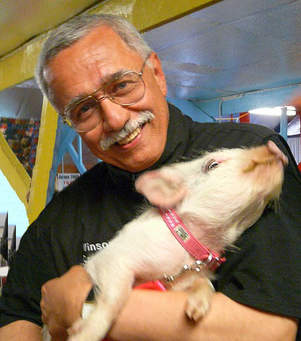 It has been called the greatest animal rights speech ever:  Philip’s Wollen’s 10-minute blazing contribution to the debate ‘Should Animals Be Off The Menu?’ held at the St James Ethics Centre, Wheeler Centre in Australia on May 16, 2012.   Philip’s speech began:

“King Lear, late at night on the cliffs asks the blind Earl of Gloucester “How do you see the world?”  And the blind man Gloucester replies “I see it feelingly”.  Shouldn’t we all?  Animals must be off the menu because tonight they are screaming in terror in the slaughterhouse, in crates, and cages. Vile ignoble gulags of despair…”

A wealthy ex Vice-President of Citibank, head of the philanthropic charity named for his beloved mother The Winsome Constance KindnessTrust,  Philip Wollen never thrusts himself into the limelight yet his outstanding work has been acknowledged internationally, and he has been awarded high honours, including Australian of the Year, in his own country.     Now into his 70s, Philip continues to campaign untiringly for the causes dearest to his heart, the majority for the benefit of other animals who are the most abused and neglected beings on the planet and the victims of the most grievous injustices.  Just in the past few weeks Philip has donated some $750,000 to organisations in Zimbabwe, South Africa, Thailand, Cambodia, Lebanon, India, the Netherlands, Nepal, Israel and others.

Gifted as a powerful orator and writer, yet like everyone else facing personal sorrows in his life, at every opportunity Philip puts the most disadvantaged first.  Recently, when reviewing the graphic production of Sydney Theatre Company’s production of ‘1984’ Philip wondered:

‘How many “meat-eaters” in the audience have ever been in a slaughterhouse, where (in comparison) Orwell’s terrifying “Room 101” is an up-market, health spa for the super-rich. One scene reminded me of my friend, Gail Eisnitz’s book “Slaughterhouse”.

“One time I took my knife – it’s sharp enough – and I sliced off the end of a hog’s nose, just like a piece of bologna. The hog went crazy for a few seconds. Then it just sat there looking kind of stupid. So I took a handful of salt brine and ground it into his nose. Now that hog really went nuts, pushing its nose all over the place. I still had a bunch of salt in my hand – I was wearing a rubber glove – and I stuck the salt right up the hog’s ass.  The poor hog didn’t know whether to shit or go blind.”

Philip ends urging us to buy Gail Eisnitz’s powerful book – and then to go vegan.  He is never afraid to tell it as it is, and yet his message is simple.   Going vegan is the one thing we can all do to stop the carnage that is taking place all around us.   We don’t have to be gifted or wealthy in this world, we just have to care.

Thankyou Philip, I am also proud to call you my friend.  You empower us all to use whatever resources we have to create a kinder, gentler, more just and enlightened society.  And it really is as simple as choosing something else to eat.

Sandra Kyle started End Animal Slaughter in 2018 as a vehicle for campaigning for the closure of all slaughterhouses in the western world before 2025.