‘Violent, gory and agonising’ – the tragic fate of ex-racehorses 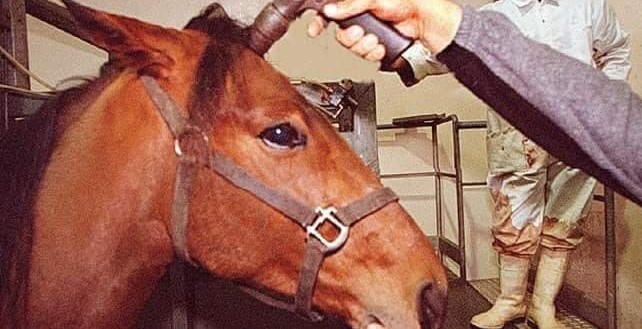 This week the Australian Broadcasting Corporation aired a programme about the fate of ex champion racehorses who, instead of being retired to live out their lives in peace and safety,  ended up in abattoirs and knackeries.  Shocking undercover footage taken in Australian saleyards and slaughterhouses shows them being cursed at, beaten and injured by workers before they were killed.

This is the fate of far too many racehorses all over the world.  A recent film,  Platinum Ticket’s Final Ride,  looks at the process that led to US champion gelding Platinum Ticket’s tragic end in an abattoirAKL.

Quote from the article:

“As with other species, slaughter occurs by the cutting of both carotid (neck) arteries which results in their bleeding to death. In some cases horses are hanged by the neck from chains until they suffocate; just one method of subduing the power of a large creature whose utter terror – even in a wounded and depleted state – makes their desperate fight for life dangerous to their killers and a financial risk to their plant and equipment. It is violent, gory and agonising. Like all our victims, their fear is simply off the scale.”