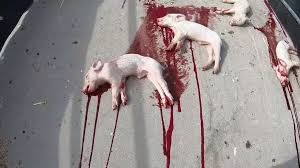 Do you know what ‘Thumping’ or ‘PACing’ means?   It is a slaughterhouse term used to kill piglets (and also baby goats) by swinging them around and pounding their heads against concrete.

The  act of murdering innocent animals in slaughterhouses, and the cruel methods employed, have their own terms and definitions that ‘sanitise’ the horror of what goes on.   For example, ‘C02 stunning’ may sound as if the animal quietly goes to sleep, but as undercover footage has shown, this method causes pigs to gasp for breath and hyperventilate, causing both pain and panic, for up to 60 seconds.  The ‘scalding tank’, while meant for dead pigs, sometimes holds conscious animals whose last minutes are filled with indescribable agony.

Slaughterhouses are places of cruelty and injustice, and they need to close down.

Here are some common terms.  (Acknowledgement:  ‘Slaughterhouse’ by Gail A Eisnitz)

Antemortem inspection:  The examination of live animals prior to slaughter.

Blood Pit:  The area of a slaughterhouse where animals are bled out.

Bloodsplash: The rupture of capillaries in muscle tissue during electrical stunning which causes unsightly blood spots in the meat.  Bloodsplash hemorrhages are problematic from an aesthetic viewpoint, and cause a reduction in meat value.

Captive bolt gun:  A gun, powered by compressed air or gunpowder, that drives a bolt into an animal’s forehead to render the animal unconscious.

Carcass: The skeleton and musculature of an animal, minus the head and legs.

Chain: The overhead conveyor that carries shackled animals from worker to worker through the slaughter and dressing processes.

Chain speed: How fast the chain is moving, measured in number of animals per unit of time. (Aka Line speed)

Chill tank: A giant refrigerated vat of water where chickens are communally cooled after dressing.

Chitlins: The intenstines of hogs (pigs) used in prepared foods.

Chutes: Enclosed passageways that lead animals from their pens to the stun area.

Downer:  A sick, spent, or disabled animal that cannot stand or walk.

Dressing:  Removal of the hide, appendages and viscera.

Gutter:  A worker who takes the guts out of slaughtered animals.

Kill floor: Where animals have their necks or chests sliced.

Legger: The worker who cuts off and skins an animal’s legs.

PACing  (sometimes called ‘thumping’):  Method of killing piglets whereby the piglet is picked up by the hind legs and slammed against the floor.  This causes massive head trauma, resulting in death (though not always instantaneous).

Render: The process whereby animal parts are cooked down, to separate fat from protein, and then sold for use in animal feed, fertilizer, oils, plastics, cosmetics and a host of other household and industrial products.

Ritual slaughter:   Religious slaughter done according to the requirements of either the Muslim or Jewish religious faith. The animal is slaughtered, often without being stunned, with a razor sharp knife.

Scalding tank:  A long narrow tank containing 140 degree water through which hogs are dragged to loosen hair for dehairing.

Shackler: A worker who places a chain around an animal’s hind leg so that it can hoisted and hung on the overhead rail.

Stunner: The worker who stuns the animals before they are shackled and hoisted.

Sticker: The slaughterhouse worker who cuts the animal’s throat open to bleed it.