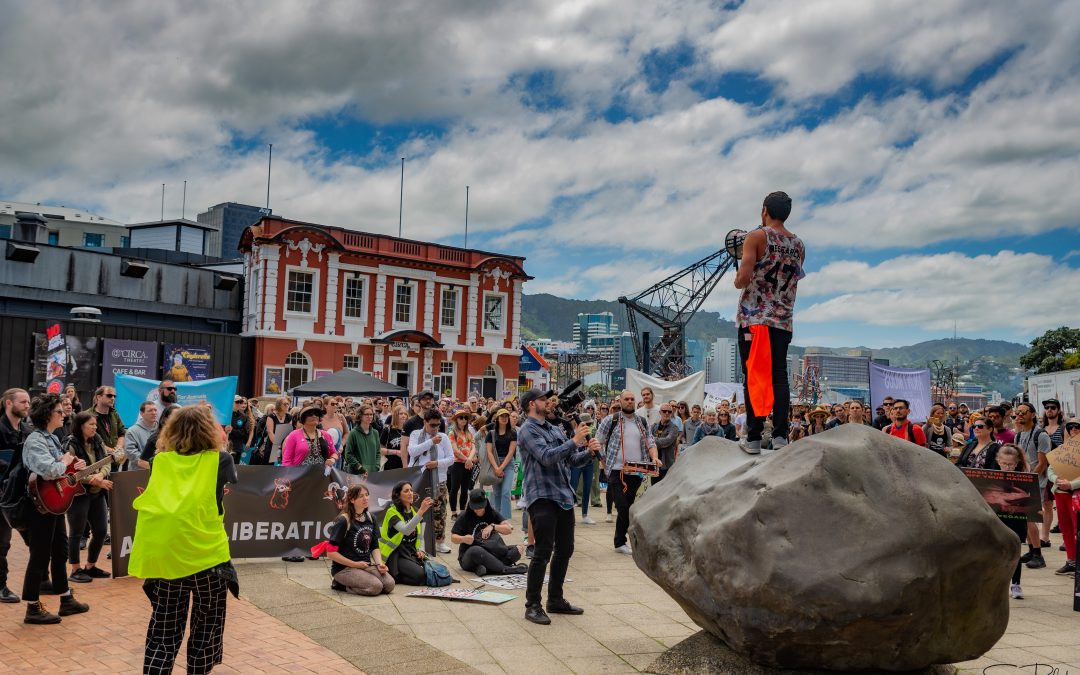 The Wellington Animal Rights March (WARM) 2020 organised by Wellington Vegan Actions attracted more than 500 marchers on 28 November, an impressive result for New Zealand’s capital with a population of only a little over 400,000. 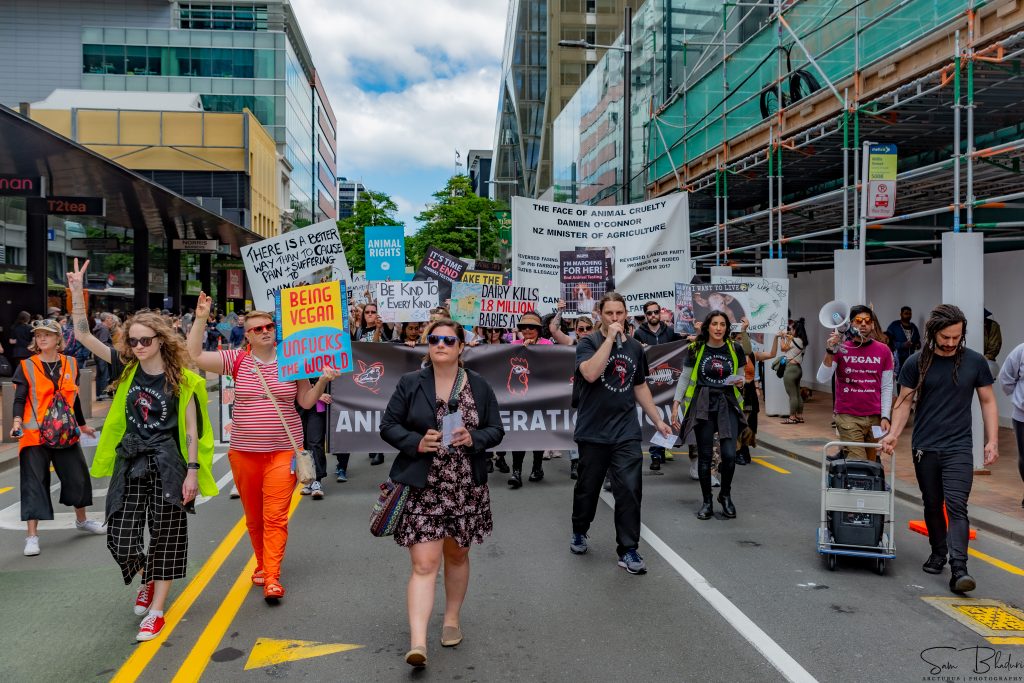 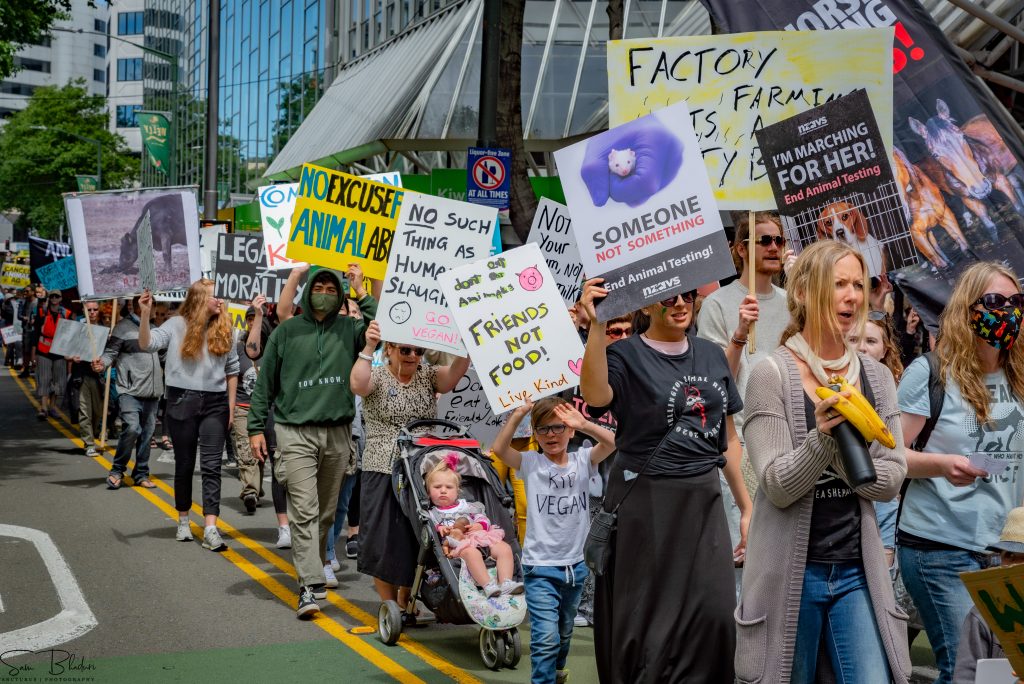 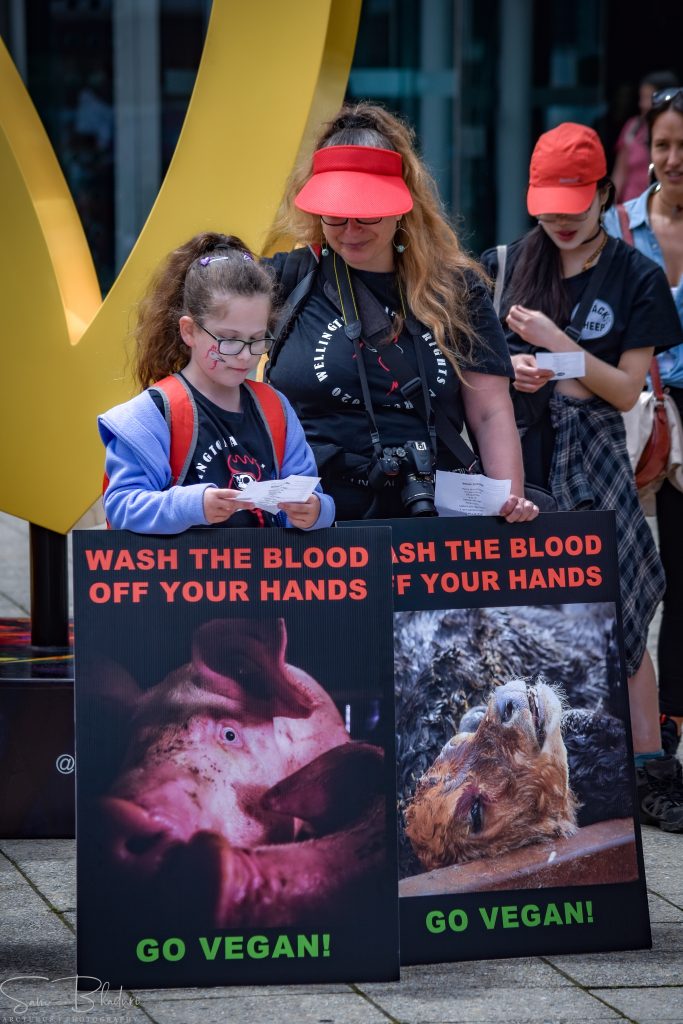 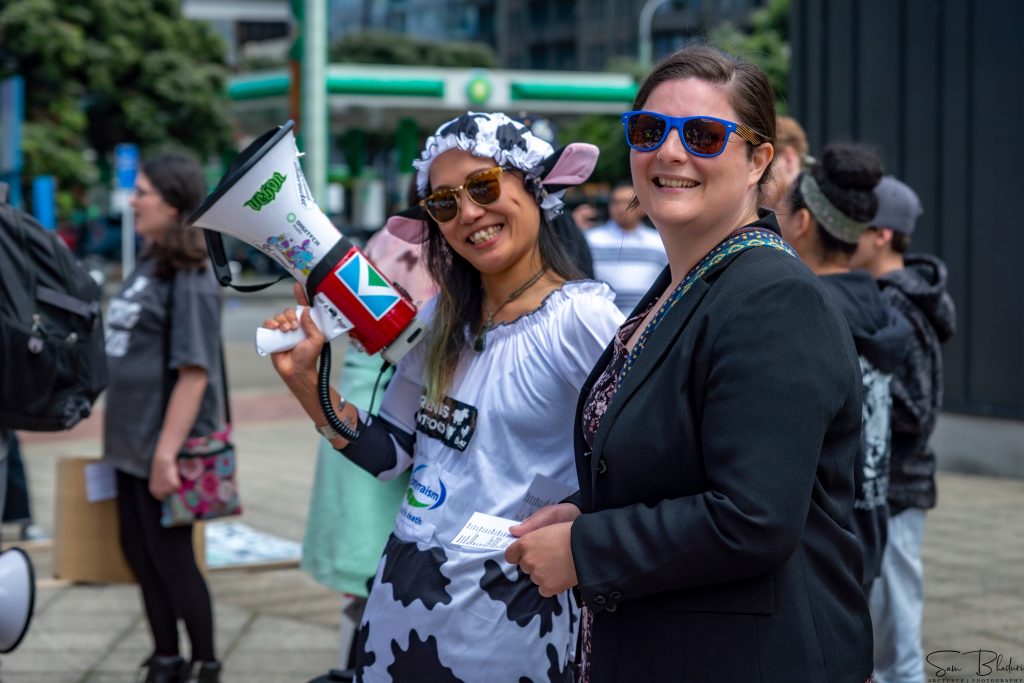 Creativity and fun – with a serious, heartfelt message – was the Order of the Day

The March was not without controversy.  While most of the signs reflected the vegan message of compassion, kindness and respect to all sentient beings and a transition away from using animals for food, testing, fashion and entertainment, coverage by mainstream media focussed negatively on one or two that used ‘colourful’ language.  One sign in particular (not shown here) was highlighted as ‘lewd’ by journalists reporting the March. 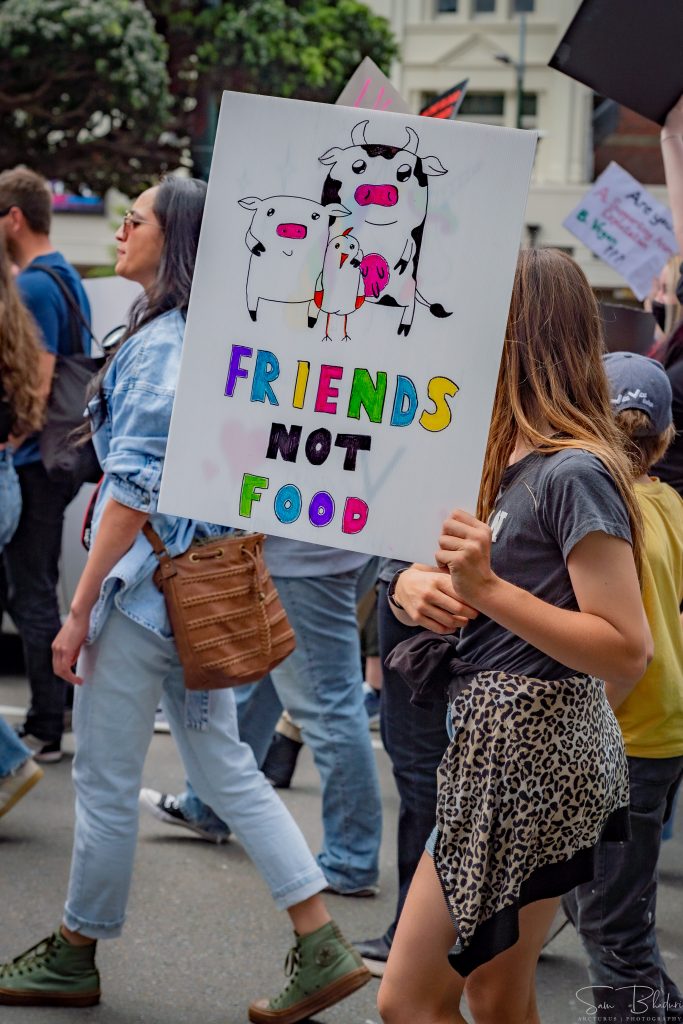 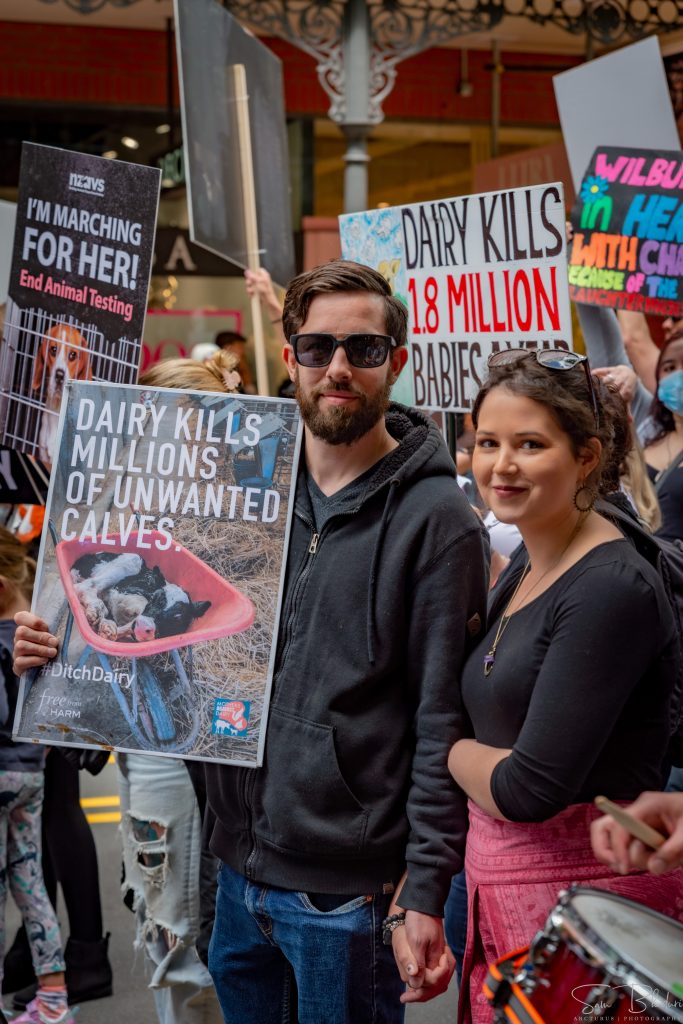 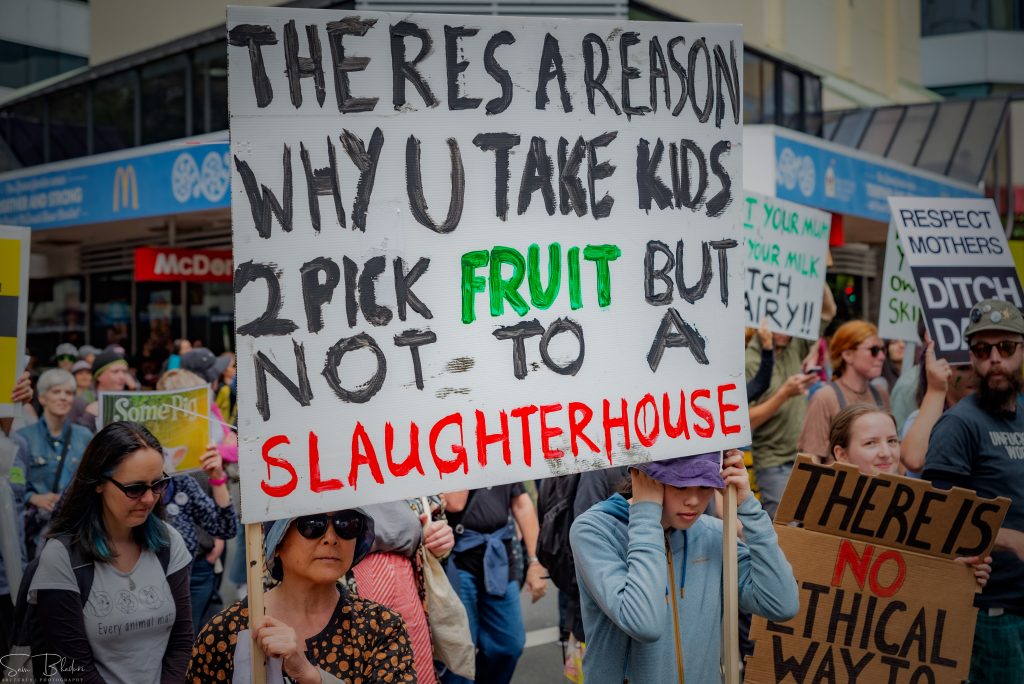 The hundreds of signs represented key concepts in Animal Rights… 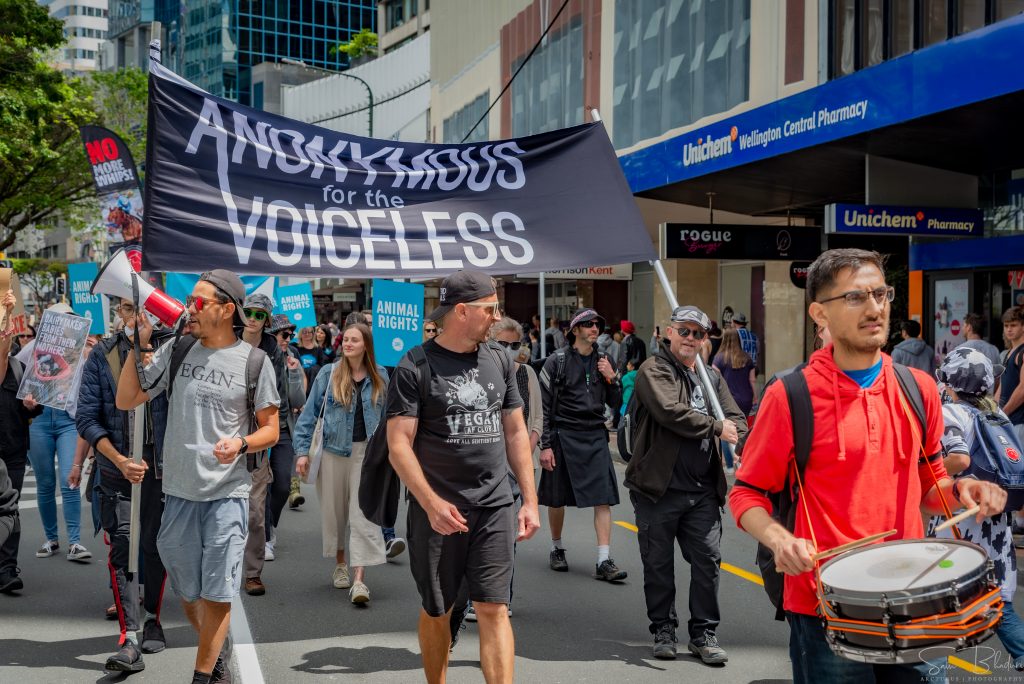 … and the March had representatives from most Animal Rights organisations in New Zealand.

Loud chants and drumming were part of the procession, which weaved its way through Wellington’s main thoroughfares to Parliament Building, where a member of the NZ Green Party,  Julie Anne Genter,  graciously received the crowd.  There were eight speakers, including representatives of Save Animals From Exploitation, Mothers Against Dairy, NZ Anti-Vivisection Society, Coalition for the Protection of Racehorses, and The Animal Save Movement. 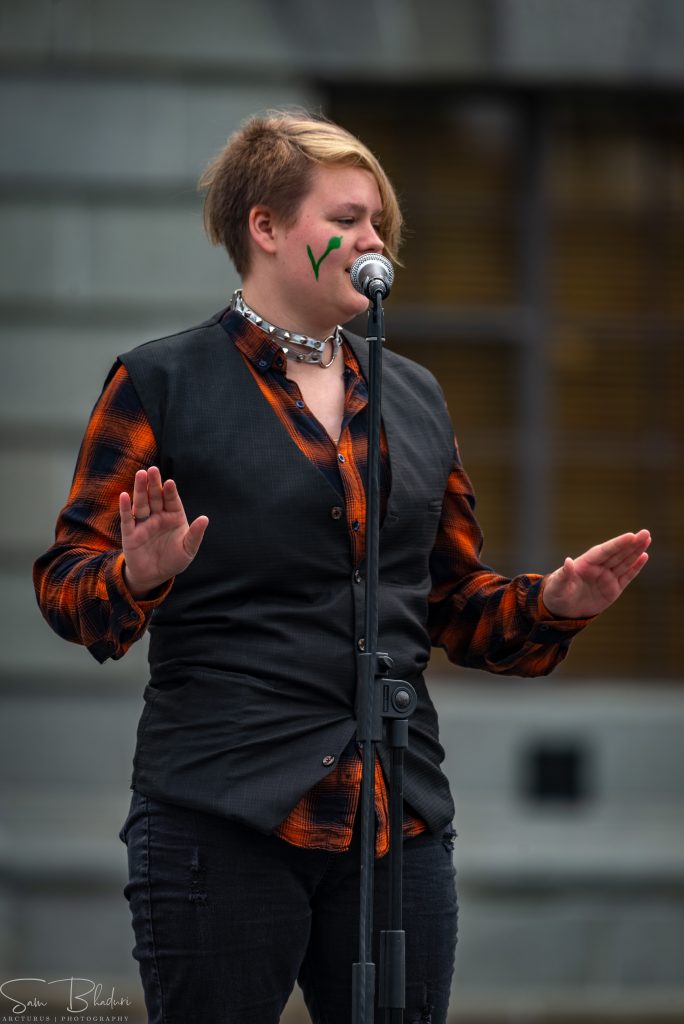 Ex slaughterhouse worker, now animal activist, Cortnee Butler spoke of traumatic experiences when working in a small NZ slaughterhouse for a few months as a teenager. 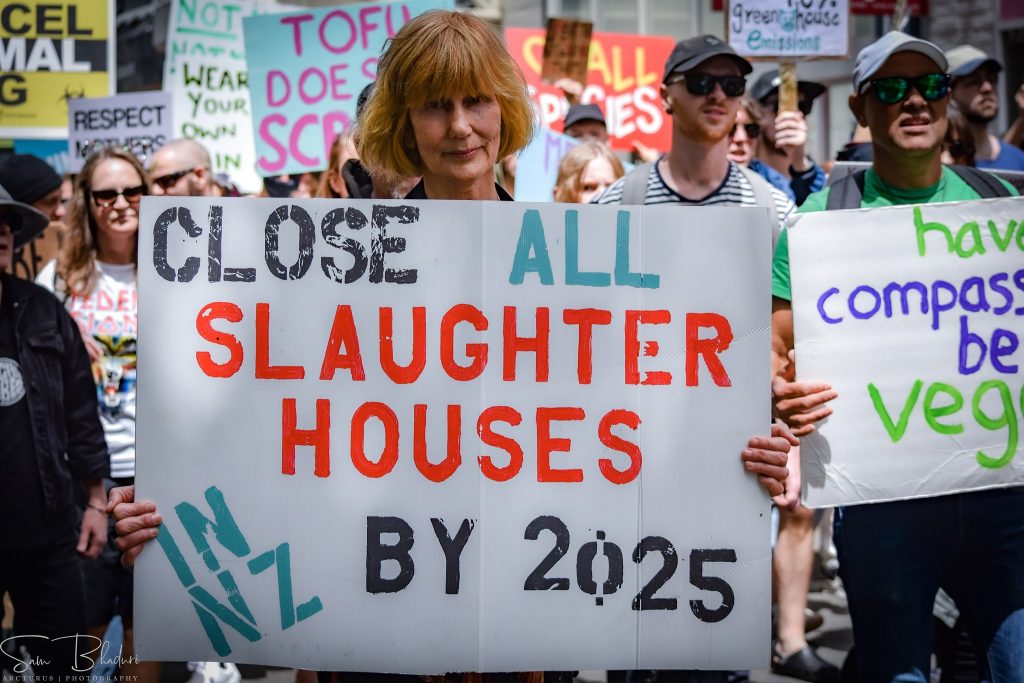 End Animal Slaughter’s Sandra Kyle was in the Parade, and one of the guest speakers. 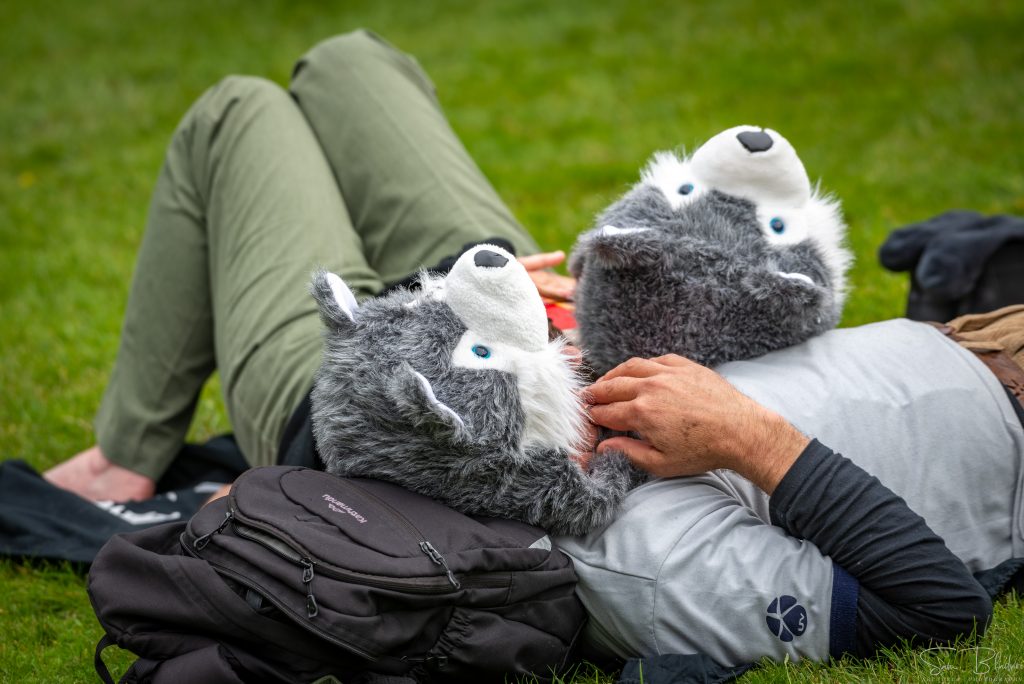 Relaxing while listening to the lineup of Speakers.

Although not obliged to, march organisers informed the Wellington City Council months ahead of time.  However a couple of days before the march the Council realised that they had scheduled A ‘Very Welly Christmas’ at the same time.  When vegans were blamed in the media for ‘gatecrashing a children’s party,’ march co-organiser, well-known animal activist Chris Huriwai, went on Radio New Zealand to put the record straight.  The marchers were peaceful, although members of the public were not always, with several hurling abuse and one man taking a swing at one of the Organisers. 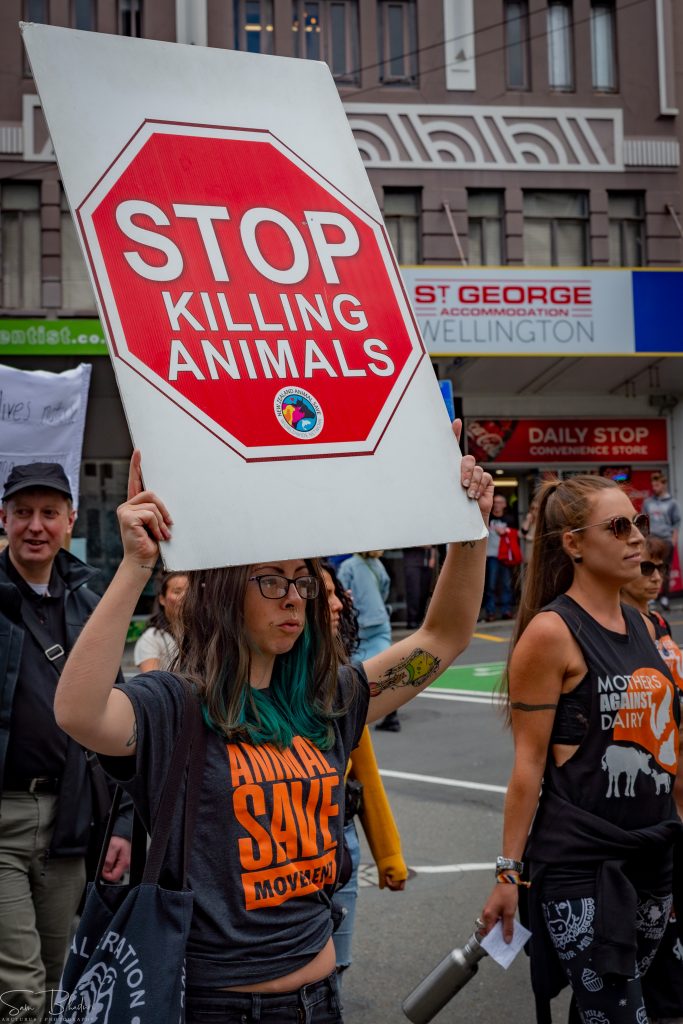 This sign is a reminder that so long as there is systematic violence towards animals there will be violence in Society.

In  2019, there were a record number of Animal Rights marches in 44 cities across the world, (mainly organised by ‘Surge’, co-founded by Ed Winters, aka ‘Earthling Ed’) but such gatherings have not been possible this year.

New Zealand’s management of Covid have made crowd restrictions unnecessary, consequently New Zealand may have been the only nation in 2020 to march for justice for animals.  In the year of the pandemic it was a clarion call to fully examine our broken relationship with animals and chart a new course forward. 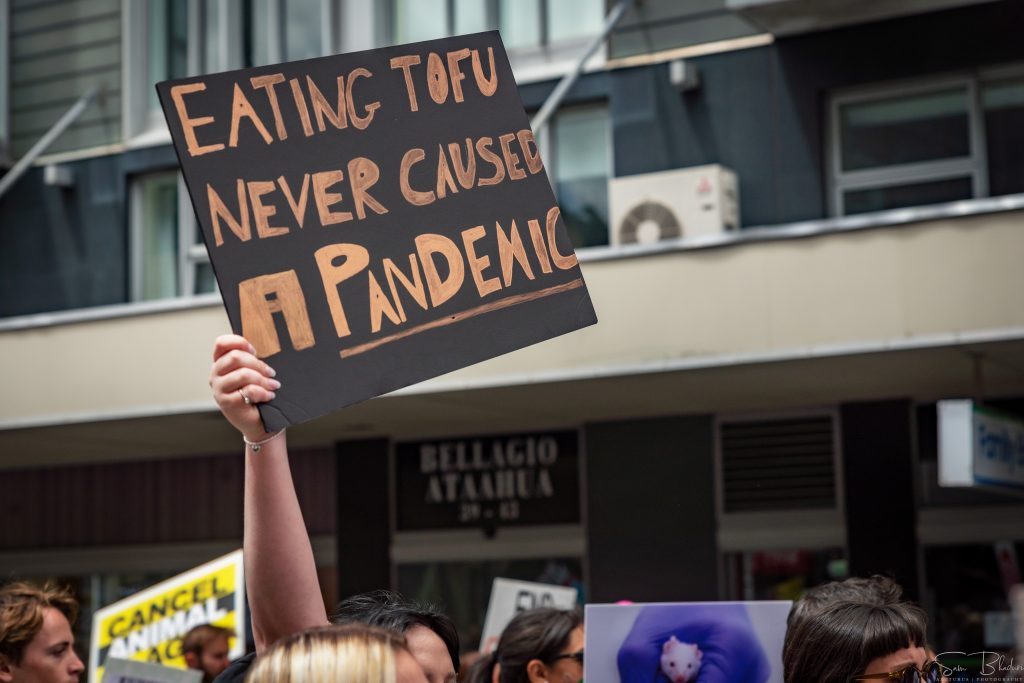 In the words of the WARM Kaupapa (mission statement):

‘To empower and grow the movement in the fight against the systemic oppression of nonhuman animals, creating a more ethical Aotearoa (indigenous name for NZ) where all sentient beings are free from exploitation and injustice’. 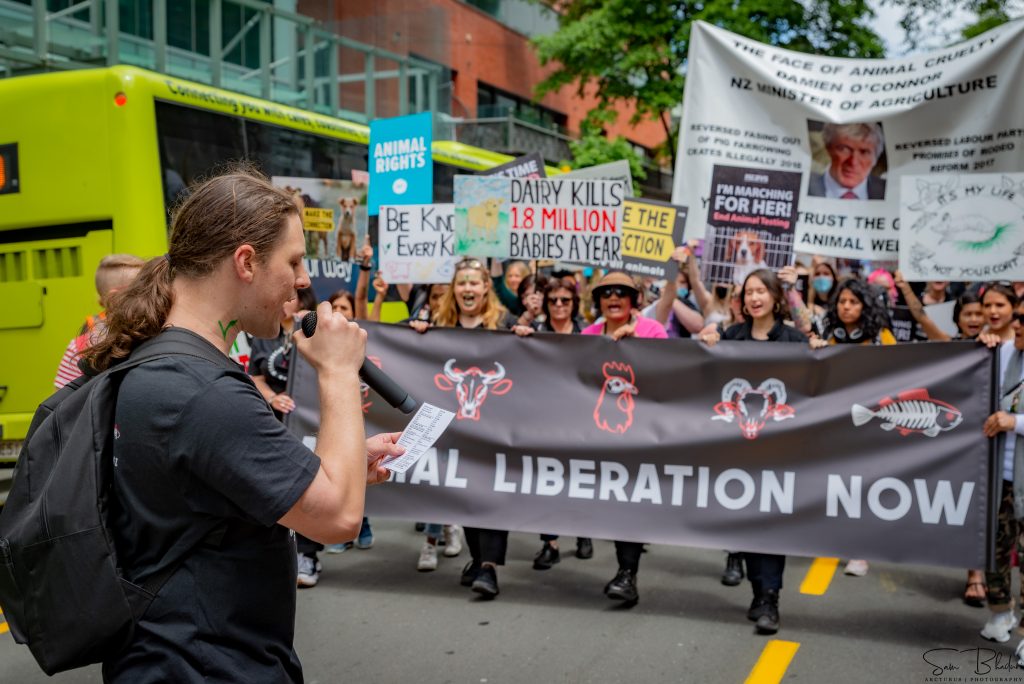 All photos by Sambit Bhaduri