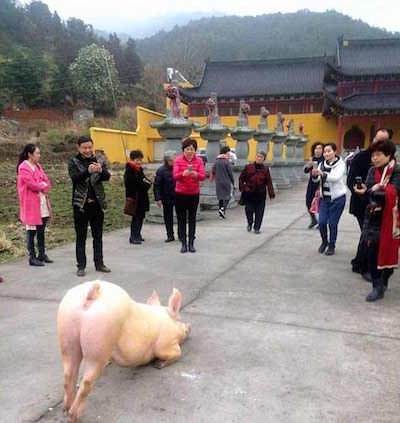 Humans have used, abused and slaughtered other animals since we have been walking upright.  The power imbalance between us and other animals means that it is at best difficult, at worst futile, for them to resist us.

But there have always been ‘rebel’ animals who have fought back against their fate, as documented in a new book by Sarat Colling, Animal Resistance in the Global Capitalist Era.  Sadly the resistence has usually been in vain.  One famous example of animal resistance is the case of the ‘Temple Pig’ in 2015.

The pig was trying to escape slaughter in Zhejiang province China, where she ran to a Buddhist Monastery and  was photographed ‘bowing down’ amongst the worshippers (feature photo).  The footage went viral on the Internet, but in reality the animal was probably just exhausted, and she was slaughtered soon afterwards.

We don’t even try to listen to animals’ voices.  If we did, we would understand how much they are like us.

Colling has written a scholarly and readable book.  Read her interview with Professor Marc Bekoff in ‘Psychology Today’ here