The Meat In My Mouth: Why I Became A Vegan – Dr Lynley Tulloch 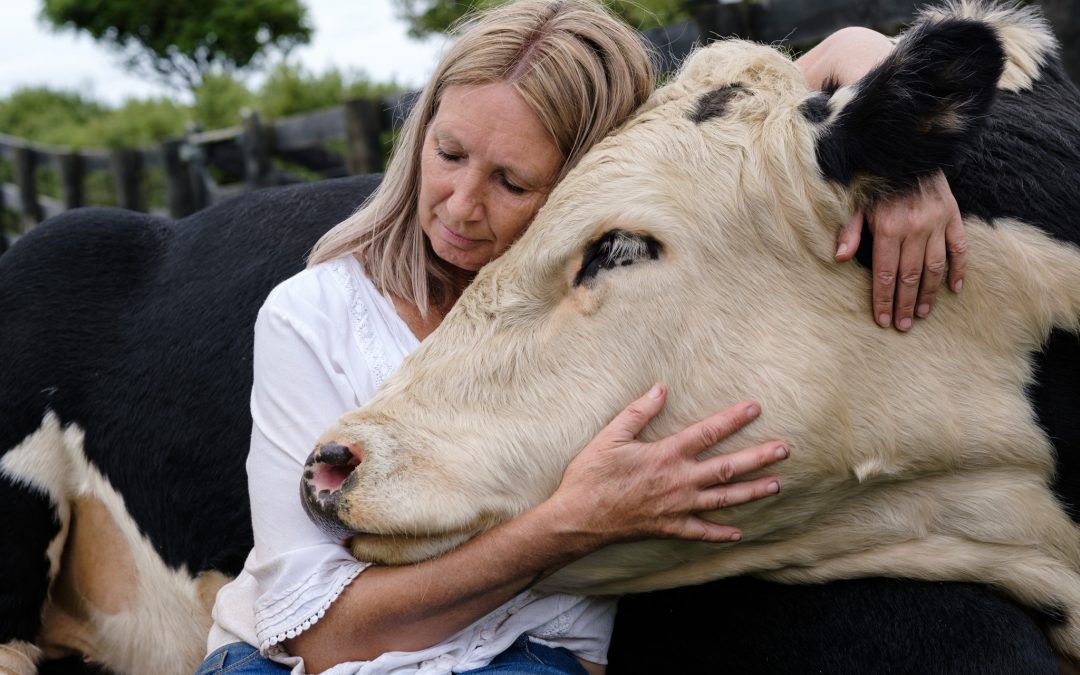 (Photos of Lynley and Harry taken by Jinki Carbronera).

I often tell people that Harry is my pet because that is the only way people can understand why an animal (usually slaughtered for meat) is living with me and my partner Andrew.

I have coffee with Harry and he allows me to lean on him and enjoy the sunshine. We don’t have to talk, and in the comfortable silences I can feel my heartrate decrease, my stress levels decline and a sense of well-being envelope me. I think Harry feels the same as he is very open with his feelings. He expresses them through movement and sound. He makes little grunts and snuggles down as he falls into a contented sleep. 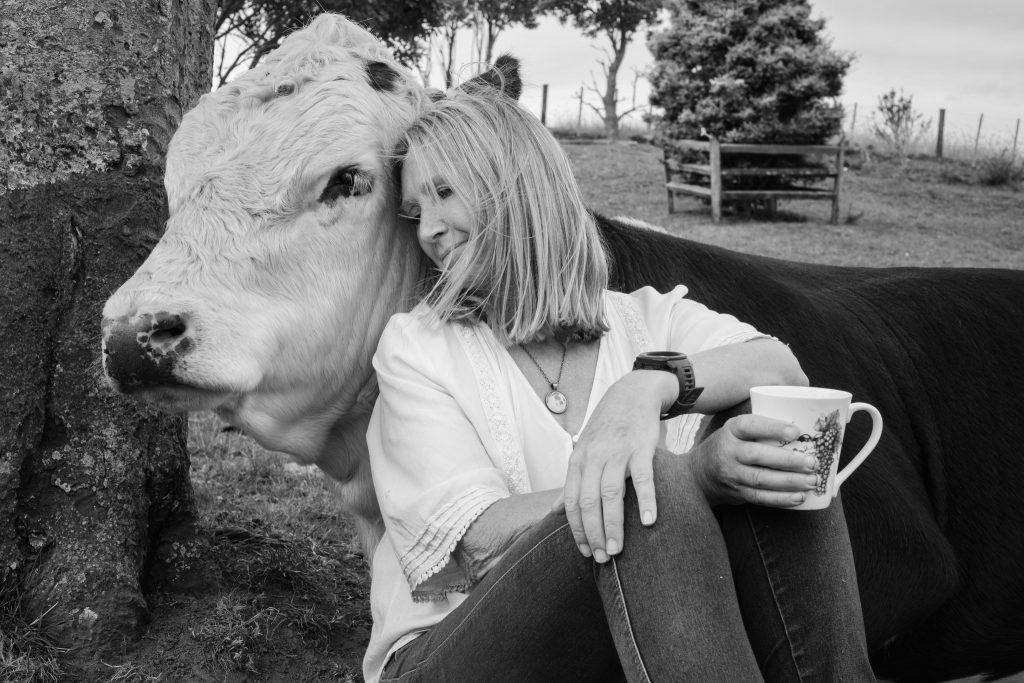 But we are oddities in a brutal world.

The subject of human-animal relations is defined in its outset by a socially constructed binary. We assume a binary between animals and humans – between us and them. This binary is further framed through the lens of superiority and inferiority. 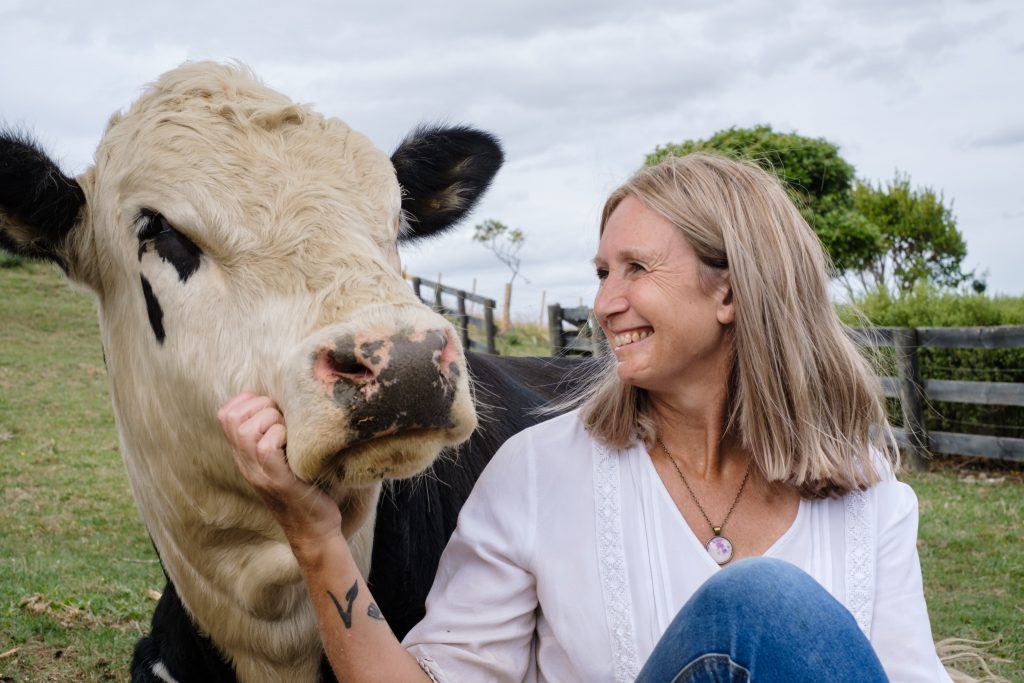 It’s a disturbing binary, because it allows us to consider the life of one of more infinite worth than the other. The idea that we can quantify the value of life; that we can put one on a barbeque and devour them in the name of species superiority is terrifying to me.

I grew up absorbing the binary through social practices designed to frame my assumptions, beliefs and emotions. Most of us have grown up in a society that assumes the normalcy of meat eating. We learn that animal life is separate from human life; that we can and should eat and wear some animals; that animals are here to entertain us; and that others are our companions. We use animals in sports and put them in cages and breed them for profit and pleasure.

I always knew, even as a child, that the meat in my mouth was an animal. I felt uncomfortable with the texture and the knowledge I was eating a once living animal. The journey towards veganism is a story of coming home to my true self.

Slowly over time I found a way of living that does not rely on violence toward other beings. Veganism provided that space for me. It is a recognition that there are other people in the world that think like me; that I don’t want or need to eat animals or their products. 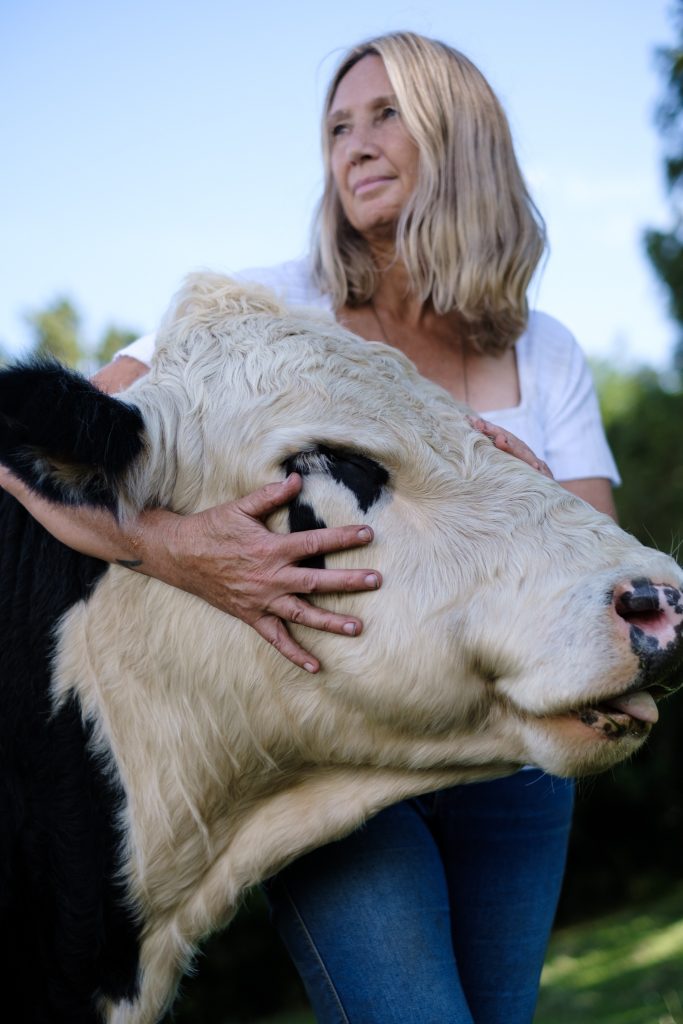 Harry is a hereford/fresian cross steer. He is probably at the age where he would be slaughtered for his meat. But that will never happen to him. He will be loved and looked after his entire life.

Harry is as deserving of life as both you and I. I don’t believe that Harry should be eaten or sold for his meat. I don’t think he should be subject to being cajoled into a truck and killed.

The problem is that he was bred into existence over time. He exists as at once a natural being and a social construct. His docility and friendliness toward humans was part of the human-selection process in breeding bovines for farming. In turn they have been used to make profit as industrialised methods of farming and capitalism frame them as nothing more than objects of production and consumption. As commodities. As meat. As hair rugs. As handbags.

But to me Harry is the sunshine on a rainy day. 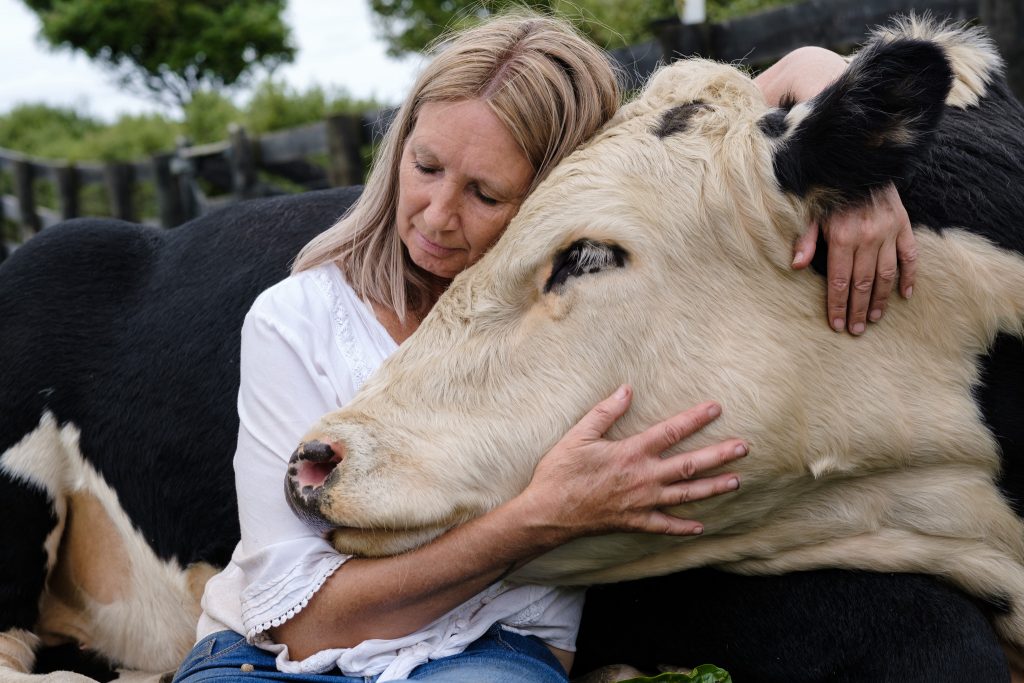 Once we may have needed meat to survive. Today that is no longer the case. These days there is no need to eat meat when there are viable, healthier, cheaper and more sustainable options.

It’s time to begin reframing the binary and see all species in a more holistic way. If not for the sake of putting an end to animal exploitation, then to address issues such as climate change and biodiversity loss. A recent study found that animal farming for meat production worldwide causes a disproportionate amount of planet heating gases. A new study has found that this is twice the amount of pollution compared to the production of plant based foods.

Have coffee and cuddles with a cow and leave them off the barbeque.

Dr Lynley Tulloch is an animal rights activist and writer, and has a PhD in sustainability education and ecocentric philosophy.