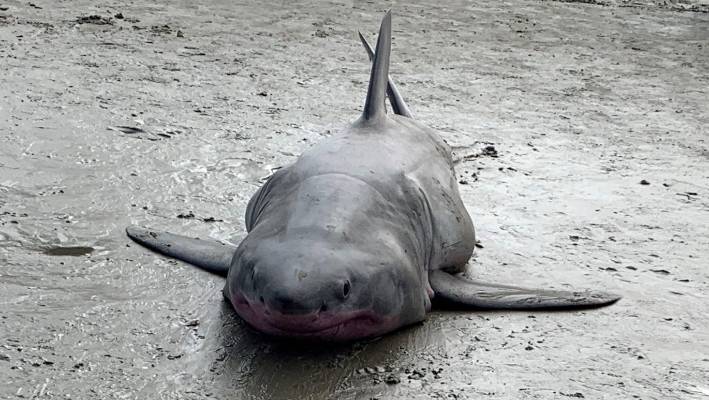 At a popular beach on the upper reaches of coastal Auckland on the second day of the new year, a crowd gathered around an unusual sight: that of a Great White Shark slowly dying on the beach.  The 2.75 female had apparently been netted on purpose (against the Law as the species is fully protected in New Zealand waters), and the fishermen were seen kicking the shark, taking selfies and laughing.    When beachgoers tried to intervene the men ‘became intimidating’.

Although there were attempts by a lifeguard and members of the public to refloat her, she returned to the beach where she died moments later.    Behind the disrespect and abuse shown by some to an individual sentient being, is a sorry story of greed and superstition that permits us to cause great pain and distress to sharks, and endanger their existence in our oceans.

Great White Sharks are on the World Wildlife Fund’s 10 Most Wanted list.   Trade in their teeth, jaws and fins, as well as commercial fishing, are making them vulnerable.   We kill around 100 million sharks a year, and a great deal of this is to satisfy the demand, mainly in China, for shark fin soup.  Shark fins are a so-called  ‘delicacy’ and are one of the world’s most expensive seafood items.

Sharks are not ‘seafood’, they are sentient beings.  As such, we can imagine the terrifying experience they endure when they are hauled out of their environment, have their fins sliced off, and then thrown back into the ocean to die slowly from blood loss, stress, or suffocation.

If we don’t want to cause the global collapse of marine ecosystems, and the untold suffering of sharks and other fish, then the most effective thing we can do is to stop creating a demand for their flesh, and become vegan.