‘You Know Who You Are’

End Animal Slaughter contributor Debbie Nelson spends a lot of time talking to people, including those in the animal industries.   She’s had enough of their rationalisations.

We have an animal holocaust going on worldwide.  Why do you deny it?  I’m so sick or hearing your excuses!

I’m getting to know you all too well. I talk to you every day, those of you who farm and process animals and their products, and also those of you who consume them. I’m so tired hearing about your animal welfare standards. They mean nothing to the suffering of the animals subjected to this ‘humane’ care.  From in-utero to death, from marketing to consumption, you are contributing to animal misery and anguish. We’re talking about billions of executions after a life of torture with no crime committed.  Where precisely is your link in this chain of animal cruelty?

You know who you are. You are the veterinarians who work at the farms; small, factory and in-between. Your job is to keep the animals alive and walking in step only so they can be killed at a fraction of their natural lifespan.  You keep compassionate, intelligent, emotional beings physically well enough until it is time to kill them to earn money for the farmers.  You are just facilitating the terrible crime that keeps them in their prisons.     Here’s one example:  you help farmers keep their sows in gestation and farrowing crates by tending to the sores where their soft bodies rub against iron bars.  How can you call yourself veteranians?  You took a oath to protect animals and relieve their suffering, not perpetuate it.

You know who you are. You are the consumer of animal products. I hear you say so often ‘I love animals.’  ‘I can’t bear animal cruelty’, and yet you pay someone to kill animals so you can eat or wear them.  Stop turning away from an inconvenient truth!  Research the facts!   Make no mistake, the blood is on your hands of those who give their lives for your cheese, milk, roast dinner, omelette.   Farm animal brutality would not even exist without your ignorant or heartless use of your dollars. Stop sticking your head in the humane washing machine! It’s time you informed yourself.    The power to do this resides with you and no-one else. 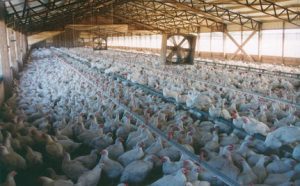 You know who you are. You are the super-rich and powerful owners of companies that produce, process and sell animal products.  You make millions from farm animal exploitation. They have none of the instruments of power you possess, and can’t speak for themselves. Even humans can’t fight you, they are also under your money-thumb.  As long as your pockets are full what does it matter that billions of animals are killed every year? As long as your investors are happy, who cares about the rest?

What does it matter that dairy calves are taken away from their mothers just hours after birth?  Who cares if dairy cows go to slaughter completely spent at 5 years old when their natural lifespan is close to 20 years?  As long as you’re making money from them, what does it matter?

If a fetal calf is taken from his slaughtered mother and has all its blood drained out while still alive, then so be it. The huge Biotech community will reap the profits. If a piglet has its testicles cut out without pain relief so its meat tastes better, then so be it. The pork associations don’t care.  If bouncing little male chicks in egg-laying hatcheries are ground up or suffocated within moments of hatching, then so be it.  Who cares if they have never known the shelter of a maternal wing? If female chicks have their beak trimmed and some toes cut off to fit them for a life in a battery cage, then so be it.   Who cares if they have the cognition of a toddler human?  What does it matter to the Big Egg producers and the laying farms?  They only care about the mighty dollar.

Let’s pause a moment to consider the often forgotten in animal farming – fish.    In the ag-business of fish farming sentient, playful, social fish lead miserable lives, overcrowded in vats of filthy water laced with chemicals to keep them alive. They endure this horror only to be conscious while being killed. Their gills are cut and they are left to bleed to death in agony. Large fish are at times hit on the head with a bat and are often alive when cut open.  But what does it matter?  They are just fish.

They are just chickens.

They are just pigs.

They are just cows.

They are just animals. 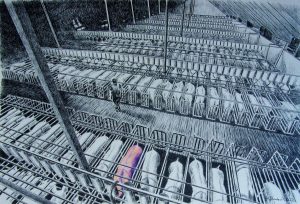 Shame on you if you own and run animal farms!    Please don’t tell me you care for your animals. What you care for is efficiency, with an eye on the most dollars you can get from your products, alive and dead.   You don’t sentence those you love to a life of misery and removal to a horrible death do you? Even those of you who allow your animals to live a comparatively decent life still send them away from their home and family, and some of you even put a bullet in their brain yourselves.  You become their friends and care takers, then betray their affection when they can no longer earn their keep. Research!  Think!   When you do you will discover that consumers are leaving off the baby cow milk and cadaver meat in droves, and the future of farming is plant-based.

The penultimate link in the chain of production in the lives of farmed animals is transportation and slaughter. Hundreds of millions are transported in the US every year for breeding, fattening and slaughter.  The industry calls it a “stage of production” referring to live beings as if they were tyres in an auto factory.  Before being transported they have to endure herding and catching. Chicken catching is particularly stressful.  Chicken catchers pursue and grab the birds, hold them upside down six to a fist, then slam them into transport crates. How would you like a electrical prod up the rectum and be moved into a totally unfamiliar place where you will have your throats slit?  That’s what six month old piglets endure.  They are supposed to live over 15 years. At a moment’s notice they must leave their homes and family to be placed in a crowded truck where they are transported in conditions that could be sweltering or freezing, deprived of food water and bedding for hours on end. Some animals experience such extreme stress that they die en route. Because of these horrible impacts on animals the issue of transportation has been addressed by federal, state and international bodies. The laws are clear but as is the case with so many rules in this industry, they are not enforced.

And now we come to the last link in the chain; slaughter, and the various euphemisms used to describe it.   Call it ‘harvesting’, ‘processing’, ‘culling’ all you like, the fact remains that it is taking away the life of a helpless being against its will.  Murder, execution, killing, homicide, slaying, massacre, butchery, carnage, bloodbath, annihilation, and destruction are all more truthful words to use.   Why don’t you admit it?   Call a spade a bloody spade, because that’s what it is.

Most people who read this will be at the consumer end of the production chain, and so my question is primarily for you.   Are you ready to let it go yet, and transition to a vegan diet? 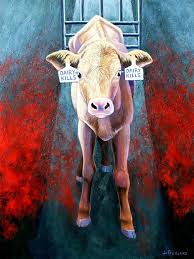