VOICES FOR ANIMALS ACROSS THE AGES: LOREN EISELEY 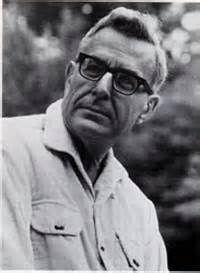 Loren Eiseley  (September 3, 1907 – July 9, 1977) was an American anthropologist, philosopher and natural science writer.   During his lifetime he received many honorary degrees for his accomplishments.   A ‘scholar of imagination and grace’,  dubbed ‘the modern Thoreau’,  he taught and wrote from the 1950s through the 1970s.

His beautiful prose was written with a sense of reverence before the natural world, and the mysteries of life.  Eiseley was an evolutionist, and both understood scientifically, and felt intuitively, the interconnectedness of all beings. 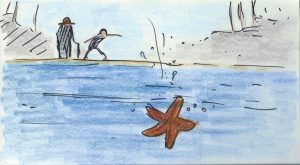 The famous ‘Starfish Story’ is based on an original story by Eiseley called  The Star Thrower’,  which appeared in his book ‘The Unexpected Universe’.  Here is an excerpt:-

I have caught a glimpse of what man may be, along an endless wave-beaten coast at dawn. It began on the beaches of Costabel. I was an inhumanly stripped skeleton without voice, without hope, wandering alone upon the shores of the world. I was devoid of pity, because pity implies hope… I concealed myself beneath a fisherman’s cap and sunglasses, so that I looked like everyone else on the beaches of Costabel, which are littered with the debris of life. There, along the strip of wet sand that marks the tide, death walks hugely and in many forms. The sea casts them repeatedly back upon the shore. The tiny breathing pores of starfish are stuffed with sand. The rising sun shrivels their unprotected bodies. The endless war is soundless. Nothing screams but the gulls. In the night, torches bobbing like fireflies along the beach, are the sign of the professional shellers. Greedy madness sweeps over the competing collectors, hurrying along with bundles of gathered starfish that will be slowly cooked and dissolved in the outdoor kettles provided by the resort hotels for the cleaning of specimens. It was there that I met the star thrower. As the sound of the sea became heavier and more menacing, I rounded a bluff into the full blast of the offshore wind. Long-limbed starfish were strewn everywhere, sprawling where the waves had tossed them as though showered down through the night sky. The sun behind me was pressing upward at the horizon’s rim ~ an ominous red glare amidst the tumbling blackness of the clouds. Ahead of me, over the projecting point, a gigantic rainbow of incredible perfection had sprung shimmering into existence.

Toward its foot I discerned a human figure standing, as it seemed to me, within the rainbow. He was gazing fixedly at something in the sand. He stooped and flung an object beyond the breaking surf. I labored another half a mile toward him and by the time I reached him, kneeling again, the rainbow had receded ahead of us. In a pool of sand and silt a starfish had thrust its arms up stiffly and was holding its body away from the stifling mud. “It’s still alive,” I ventured. “Yes,” he said, and with a quick, yet gentle movement, he picked up the star and spun it over my head and far out into the sea. “It may live if the offshore pull is strong enough,” he said. In a sudden embarrassment for words I said, “Do you collect shells?” “Only ones like this,” he said softly, gesturing amidst the wreckage of the shore, “and only for the living.” He stooped again, and skipped another star neatly across the water. “The stars,” he said, “throw well. One can help them.”

‘THE JUDGEMENT OF THE BIRDS’ is another famous Eiseley work.

I have said that I saw a judgment upon life, and that it was not passed by men. Those who stare at birds in cages or who test minds by their closeness to our own may not care for it. It comes from far away out of my past, in a place of pouring waters and green leaves. I shall never see an episode like it again if I live to be a hundred, nor do I think that one man in a million has ever seen it, because man is an intruder into such silences. The light must be right, and the observer must remain unseen. No man sets up such an experiment. What he sees, he sees by chance.

You may put it that I had come over a mountain, that I had slogged through fern and pine needles for half a long day, and that on the edge of a little glade with one long, crooked branch extending across it, I had sat down to rest with my back against a stump. Through accident I was concealed from the glade, although I could see into it perfectly.

The sun was warm there, and the murmurs of forest life blurred softly away into my sleep. When I awoke, dimly aware of some cornmotion and outcry in the clearing, the light was slanting down through the pines in such a way that the glade was like some vast cathedral. I could see the dust motes of wood pollen in the long shaft of light, and there on the extended branch sat an enormous raven with a red and squirming nestling in his beak.

The sound that awoke me was the outraged cries of the nestlings parents, who flew helplessly in circles about the clearing. The sleek black monster was indifferent to them. He gulped, whetted his beak on the dead branch a moment and sat still. Up to that point the little tragedy had followed the usual pattern. But suddenly, out of all that area of woodland, a soft sound of complaint began to rise. Into the glade fluttered small birds of half a dozen varieties drawn by the anguished outcries of the tiny parents.

No one dared to attack the raven. But they cried there in some instinctive common misery, the bereaved and the unbereaved. The glade filled with their soft rustling and their cries. They fluttered as though to point their wings at the murderer. There was a dim intangible ethic he had violated, that they knew. He was a bird of death.

And he, the murderer, the black bird at the heart of life, sat on there, glistening in the common light, formidable, unmoving, unperturbed, untouchable.

The sighing died. It was then I saw the judgment. It was the judgment of life against death. I will never see it again so forcefully presented. I will never hear it again in notes so tragically prolonged. For in the midst of protest, they forgot the violence. There, in that clearing, the crystal note of a song sparrow lifted hesitantly in the hush. And finally, after painful fluttering, another took the song, and then another, the song pass-ing from one bird to another, doubtfully at first, as though some evil thing were being slowly forgotten. Till suddenly they took heart and sang, from many throats joyously together as birds are known to sing. They sang because life is sweet and sunlight beautiful. They sang under the brooding shadow of the raven. In simple truth they had forgotten the raven, for they were the singers of life, and not of death.

A message from Thich Nhat Hanh

VOICES FOR ANIMALS ACROSS THE AGES: ELLA WHEELER WILCOX