The Depravity of Live Export

The live export of animals from New Zealand and Australia is a contentious issue, with concern over welfare outcomes. Despite this, 56,000 sheep are currently being exported from Australia to Kuwait and the United Arab Emirates by live export company RETWA.

There have been objections to this voyage from animal rights group Animals Australia, who call them ‘death ships’, but these were overturned. The sheep boarded  the MC Ocean Drover during the weekend of 25 May to sail the high seas. But this is no cruise ship in paradise for these woolly unfortunates, and they will undeniably suffer.

Animals Australia report that these sheep will wallow in their urine and feces which accumulates each day on export ships. This waste builds up and melts into a deathly soup when temperatures rise, and ammonia levels reach unbearable proportions. Sheep will get crushed trying to get to the fresh air vents for cooler air. The irritants from ammonia cause eye infections and the dust from food pellets lead to respiratory illnesses. Many sheep will die painful and slow deaths.

Those that survive will enter a foreign country with their sheep death passports. They are regarded not as individuals but as live lumps of meat. Humans often don’t see the person behind the wool and the ear tag, but there is one there. Sheep have individual personalities, intelligence and emotions. Exporting them as if they are a sack of vegetables is nothing short of depravity.

Sheep get such bad rap for being mindless and stupid, and undeservedly so. There is a deep intelligence, sensitivity and emotional life underneath the woolly coat. Scientists at the University of Cambridge have found that sheep have the brainpower to equal rodents, monkeys and, in some tests, even humans. Sheep are not only intelligent but also deeply sensitive and have complex emotions. A 2009 study showed that : “Sheep are able to experience emotions such as fear, anger, rage, despair, boredom, disgust and happiness because they use the same checks involved in such emotions as humans”. Sheep feel despair in uncontrollable and discrepant situations that don’t meet with expectations – like a live sheep export journey . 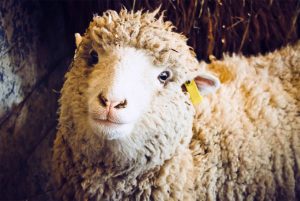 A recent study on sheep by neuroscientist Lori Marino and Professor of media studies Debra Merskin concluded that sheep are highly intelligent and social individuals with distinct personalities. Tests done on sheep revealed excellent learning and prodigious memory abilities. Marino and Merskin contend that: “Sheep have emotions that range across the spectrum and combine with cognition in complex ways. They show evidence of cognitive bias, emotional reactions to learning, emotional contagion (which may be a simple form of empathy), and social buffering”.

So, in short we have 56.000 intelligent and deeply sensitive individuals being shipped without their consent or knowledge to another country to be killed. If we think about the studies above, we can conclude that they are likely to be experiencing despair, fear and boredom – and possibly even rage. I know that I would be feeling all these things if it happened to me. But even worse for the sheep, they have no human language to even possibly grasp the depraved rationality behind what is happening to them.

The truth behind live exports is as chilling as a horror movie, and in all honesty is just as well the sheep do not know. They are sent overseas to be slaughtered. As can be expected there have been many catastrophes when things don’t go right.  In 2013 there was a scandal and compliance investigation after the unauthorized movement of sheep in Kuwait. Legally exported sheep have to be killed at an approved slaughterhouse facility, but Animals Australia obtained footage of 100 sheep outside of this chain in markets. These sheep were likely to have been slaughtered on site as is the custom,  their throats cut while they struggled for life. The report by the Australian Government concluded that, “there was a loss of control leading to unauthorised movement of sheep outside the approved supply chains.”

Other reports from Animals Australia are of sheep in Malaysia who were “thrown, trussed, dragged and had their necks ‘sawn at’ by unskilled slaughtermen. All while fully conscious”. In 2014 Animals Australia investigated the Festival of Sacrifice, which they reported  is a goldmine for live animal exporters. The atrocities on animals committed in the name of this festival are sadistic and cruel. 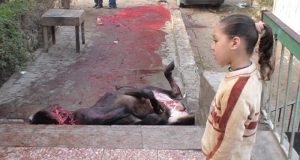 This is the absolute folly of live export. The legalities from the countries exporting the animals require compliance to accepted animal welfare codes. But once animals reach their destination, there is no guarantee that these laws are upheld. Animal welfare standards in Australia and New Zealand are woefully absent in many countries that animals are shipped to. Corruption, crime and industry cover-ups keep these atrocities in the dark.

It is not just sheep who suffer in Australia’s live export business. RSPCA Australia details that each year three million live sheep, buffalo, cattle and goats are exported to be killed for their meat overseas. Some are even wild, having been caught from the bush. Unused to people and fences, their journeys must be all the more horrific.

Australia recently came under scrutiny for shipping 3000 live dairy cows to Sri Lanka through  the Australian owned export corporation Wellard.  New Zealand has shipped 2000 cows to Sri Lanka. Sri Lankan farmers have not received guidance and support promised from Wellard and the cows are suffering with dysentery, mastitis and Mycoplasma bovis bacterium. Distressing footage has emerged of these cows collapsing and dying. Wellard still has to send another 15,000 cows to fill the order.

But cows aren’t books from Amazon. You can’t just ship them off across the globe and cross your fingers. This isn’t going to end well, especially not for the cows.

New Zealand has a colorful story when it comes to the whole live shipment debacle. New Zealand banned live export of sheep following a 2003 disaster when 5000 sheep died on a ship bound for Saudi Arabia. Saudi Arabia rejected a shipment of 57,000 sheep which then were left stranded at sea with no port for two months. Thousands of sheep died slow and horrific deaths on board. The remainder were gifted to the poor northern African nation Eritrea where they  were killed in makeshift slaughter houses.

Yet New Zealand has struggled over the years to maintain this ban due to pressure on New Zealand’s trading and diplomatic relationships with Saudi Arabia.  Between 2010-2012 Sheik Hmood Al-Khalaf , an influential Saudi businessman with significant interests in New Zealand animal agriculture made his grievances public.  This resulted in a  multi-million cash payout, and a New Zealand built  Agrihub and slaughterhouse in the Saudi desert – all on the taxpayer. New Zealand was fearful that the influence of Mr. Al-Khalaf would blight free trade agreements with the Gulf States.

It basically comes down to terse playoff between the lives of animals and the almighty dollar. And as usually happens, morals go down the drain when financial interests are at stake. When treating animal lives as commodities there is always going to be this kind of tension between their well-being and maximizing profit.

Apart from this debacle, 2017 statistics demonstrate ongoing live exports with 8 million live animals exported overseas, much of whom were day-old chicks and incubated eggs ready for hatching, 27,306 live cattle for breeding and more than 15,000 kilograms of bees. Only 123 of all live exports were sheep. Many New Zealand cattle are sent to China to spend their lives in concrete feedlots, only to be slaughtered after they have fulfilled their reproductive ‘duties’. Ultimately exporting for breeding results in the animal’s slaughter.

The issue of live export is a heated one, but it is also quite simple if we follow ethical principles rather than material ones.  Non-human animals are not commodities, and should not be subject to long journeys across the ocean for any reason. They are intelligent individuals who feel a complex range of emotions and value their lives. We have no right to treat them as mere fodder for the capitalist machine. 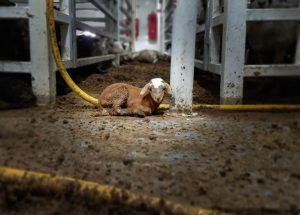 I am Meat Chicken