Study confirms that ‘religious’ slaughter is more painful to the animal 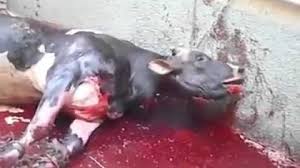 … but there is no humane way of slaughtering an animal who doesn’t want to die.

We should not be slaughtering animals at all. Period.  But so long as we are, those who eat animals and their products should know how the meat got onto their plate.

We are told that animals do not suffer during slaughter, as they are stunned prior to the throat being slit.   However, this facile statement does not bear careful scrutiny.  For one thing, it does not take into account the emotional suffering the animal feels on the way to slaughter, packed inside a slaughter truck, or waiting for their turn to be killed.  Animals are our evolutionary kin, not aliens, not machines, and they are similar to us in many ways.  Like us, their evolutionary instincts have equipped them to feel when they could be in danger.  When they see their friends disappearing (and possibly seeing the slaughter happening in front of them); when they ‘smell blood in the air’; they will certainly feel fear and possibly panic.  Neither is stunning always instant, and a significant number of times the stun mechanism fails.   Stunning can also be prolonged, as is the case in a common method of rendering pigs unconscious before slaughter.  Video footage of asphyxiating pigs screaming and desperately trying to escape C02 chambers are available on the Internet for all to see.

Many slaughterhouses in New Zealand, and the rest of the Western world, are certified for so-called ‘religious’ killing.  For a number of years the debate has swirled around halal and kosher killing methods, the slaughter methods that render meat ‘permissible’ for strict Muslims and Jews to eat.   Proponents of these methods state that the skill of the trained slaughtermen means that the severing of the carotid artery is so deftly done that it causes a ‘pressure drop’ and analgesia is almost immediate. They therefore maintain that the animal feels no more pain than if they were stunned.

A study led by Professor Craig Johnson of Massey University in Palmerston North New Zealand has clearly shown that an animal slaughtered without prior stunning feels prolonged pain.  Johnson’s work builds on the analysis of specific patterns of brain electrical activity recorded in experiments using human volunteers, and reproduced in a number of  other mammal species known to be experiencing pain.

It should be added that the Massey research team found a way of lightly anaesthetising the animals so they would not have felt pain, but the pain signals still appeared on the electrocephalagram.

In many places in the western world, a modified halal slaughter is done that includes prior stunning.    But we who advocate for the rights of other animals will never condone animal slaughter.  There is no humane slaughter of a being who does not want to die.   However, there are methods that produce less pain and distress in the animal than others.   So-called religious slaughter, traditionally carried out, has now been proven by Science to produce prolonged pain in the animal being slaughtered.