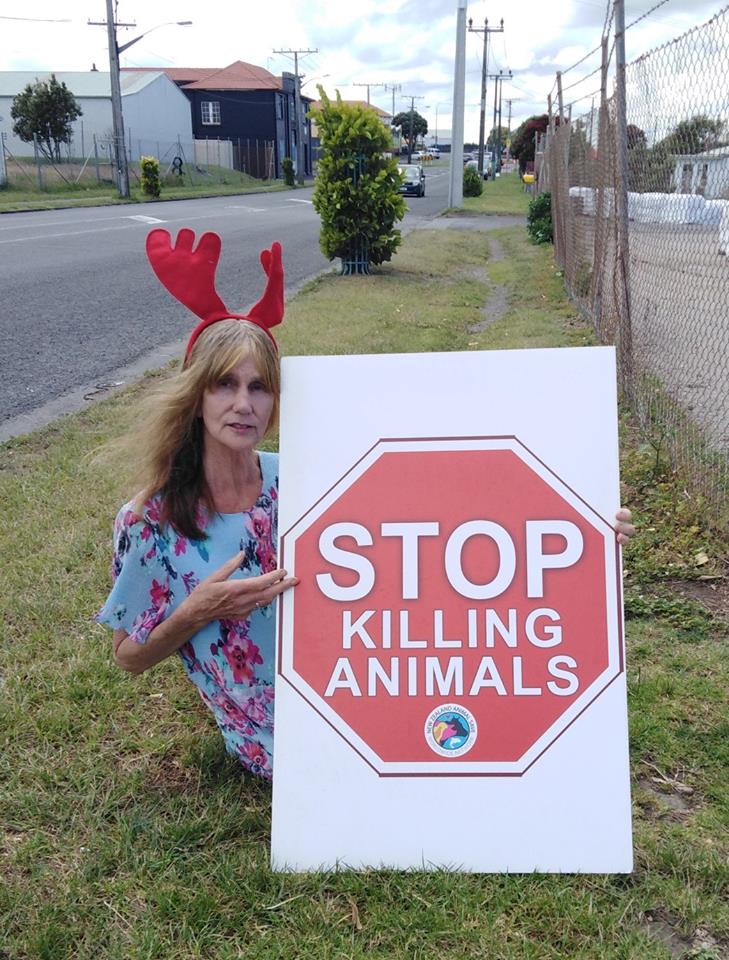 It was our Christmas vigil, so Kirsty and I wore raindeer antlers today. I noticed we got fewer toots than usual though and wondered if people could be feeling uncomfortable about the side of ham they purchased at Pak ‘n ‘Save for Christmas dinner…..?😪😪
I understand how hard it is to change cultural attitudes and culinary preferences even when those preferences involve cruelty and injustice. People cling to their ideas without examining them deeply, especially when they involve something as intimate as a food preference. They prefer to live with cognitive dissonance rather than change their diet. That is why I – and hundreds of thousands of animal activists the world over – are so persistent. We know that the end of meat is not going to happen of its own accord. The animals need us to work hard on their behalf, and sometimes it just calls for one tap on the nail of the meat-eating coffin at a time.
Speaking personally, I have the impression many people think I’m hopelessly unpractical. My honest opinion is that these people are mistaking visionary idealism for naiievity, and they are not at all the same thing. Animal activists aren’t stupid, in fact many have very fine minds and high ethics, with strategic and practical bents. This is especially true for the marvellous younger ones coming through.
It is largely thanks to animal activists that meat and dairy consumption is declining rapidly. That and concern about the environment. People are slowly changing, but I know for a fact that a number of my friends and family would rather jump from a tall building than admit that I had anything to do with their morphing attitudes. They have raised their eyebrows far too high for far too long to say: ‘Sorry, you were right all the time.’ 😀😀
Last week I was at the hospital about my hip that needs replacing, and got chatting with a farmer.
“I respect individual choice’ she said. ‘I respect the rights of vegans not to eat meat, and in turn they need to respect my choice to do so. I appreciate the food chain.”
She was a smiling, outgoing sort of person, mother of three children, a huge sheep farm to run with her husband, and she was also a prize-winning horsewoman. Quite likeable. I wanted to pull her up on a couple of things she said: ‘Aren’t you forgetting that your personal choice involves someone else who doesn’t want to die?‘ And as for ‘appreciating the foodchain’ – a glib rationalisation if ever I heard one – I wanted to state the obvious that while other animals have no choice but to kill and eat other beings, we certainly do. But instead I just smiled. She was a nice lady and I didn’t want anything to come out and hurt her feelings unnecessarily. So I said nothing.
Today outside Land Meats Kirsty was approached by a couple of young men who thought what we were doing was hilarious, literally guffowing with mirth they were. ‘Laugh all you like mateys” Kirsty said, unphased, continuing to take her photographs. While we were there, two trucks arrived in twenty minutes, and the pens at the back were filled to overflowing. All sentient beings who must endure an anxious and hungry night before they are slaughtered tomorrow morning.
On the way home I was telephoned by Dawn from Bird Rescue, to pick up a fledgling. I tried feeding the little blackbird but he didn’t want to eat, and realised that I was probably going to have to drive him all the way to Turakina. In the half hour journey down I kept whistling to him over and over again, a fragment from an operatic aria that popped into my mind. He must have liked it because he kept tweeting back at me. I can’t help wondering if when he is finally released to make his way in the world, whether his birdy friends wonder who the strange one is among them with such a different call from the other blackbirds. Shades of Rossini, no less…..
Happy holidays to all who read this.   May all beings be happy. May all beings be happy. 🐣🐣🐣