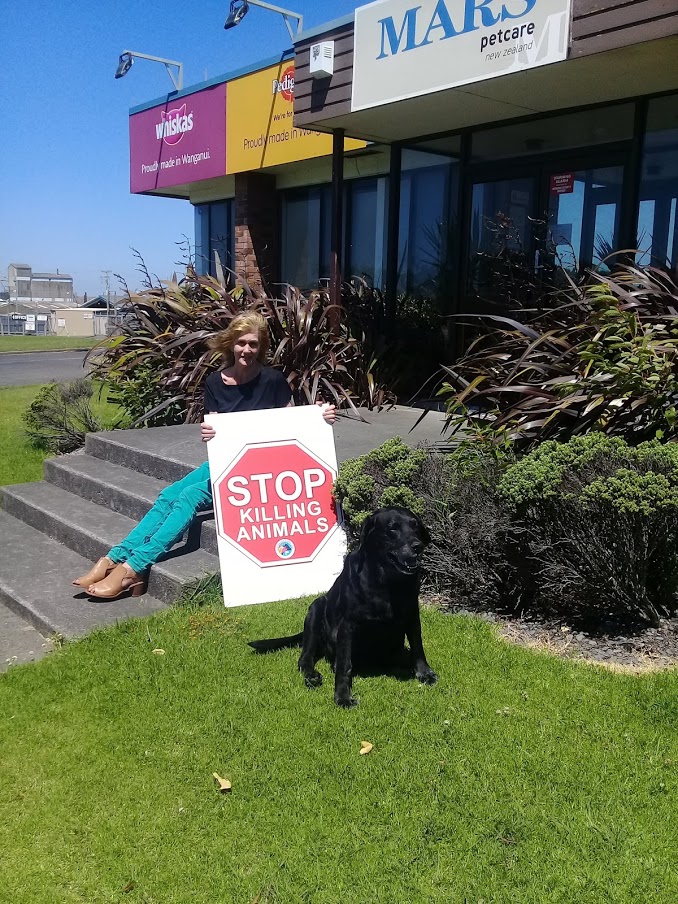 ‘Dominoe effect:  When one action sets off a series of chain reactions…. ‘

As the end of meat approaches, multiple actions in multiple areas will see slaughterhouses beginning to fall like dominoes….  Go to thesavemovement.org to start or join a slaughterhouse vigil in your area.

Not one truck arrived at our vigil outside Land Meats today and we saw no staff or cattle in the holding pens. A couple of motorists yelled out aggressive comments at Kirsty and I, and a few raised their middle fingers, but there were also a lot of toots and thumbs up. We were chatting about Kirsty’s recent trip to Australia when a young man riding a bike drew up in front of us.

“I want it to stop” he said, referring to my sign ‘STOP KILLING ANIMALS’, ‘but humans are so f*cked up, I can’t see how it will happen. Man, I despair sometimes.’

The young man was tanned, wore his hair in dreadlocks, and was very good looking. He spoke a torrent of words, but it was hard to follow his argument as it jumped around from the environment, to third world exploitation, to karma and the yin and the yang – and back again! But he seemed sincere, and he said some interesting things.

He was a bee keeper. I should mention at this point that one of the hardest things for me when I became vegan was to give up honey. Honey had been a staple food of mine for decades, I would easily eat a kg a week. Even now, if I am feeling distraught over anything my first impulse is to rush to buy some honey, which I never keep in the house. I usually overcome the impulse, but I do know some people who are otherwise vegan who still eat honey.

There is an argument that ‘natural beekeeping’ is actually helping bee populations, who are dying out in the wild. Commercial beekeeping though is definitely hard on bees. Large hives are used, and the poor bees feel they have to work overtime to fill the space with honey in order to survive the winter. They can literally work themselves to death to fill the ‘supers’ that are piled upon one another. As the supers get filled with honey the commercial beekeepers take them all out and replace the bees’ natural food with sugar dissolved in water to feed them over winter. This is not nearly so healthy for the bees as the product they have made for millennia – honey – is filled with antioxidants vitamins and minerals and is the perfect food for them.

Commercial beekeepers also clip the wings of Queens so the hive cannot swarm, and they further stress bees by transporting them over long distances to relocate. Another practice beekeepers use is smoking, which they do to distract or make the bees sluggish when they are interfering with their hive or trying to take out the honey. Smoking is also controversial, but some natural beekeepers do it as they say it lulls the bees, and stops them from panicking. If even one bee got spooked it would quickly spread through the hive and many bees could die in the chaos.

Our young man told us he didn’t smoke his bees, but tried to be in tune with them. ‘I know that if I go near them when I am all keyed up, bam bam! But if I am in the right headspace then they stay calm. We understand each other. They are very aware.’

I invited him to come and do a vigil with us sometime, and wanted to take his photo, but he declined. I think like many other residents of Whanganui who pass us and toot their support, he understood at a deeper level what we are trying to do. ‘Love you guys’ he said as he and his dog left.

Although a warm day, there was a strong wind in the Gonville/Castlecliff area. Driving home I could distinctly smell the nauseating (for me) odour of cooking lamb or mutton that I still remember from my childhood. Land Meats slaughterhouse staff may well have been on holiday today, but the smell in the air told me that there was plenty of activity going on at the AFFCO plant.