SIX REASONS YOU SHOULD GIVE UP DAIRY 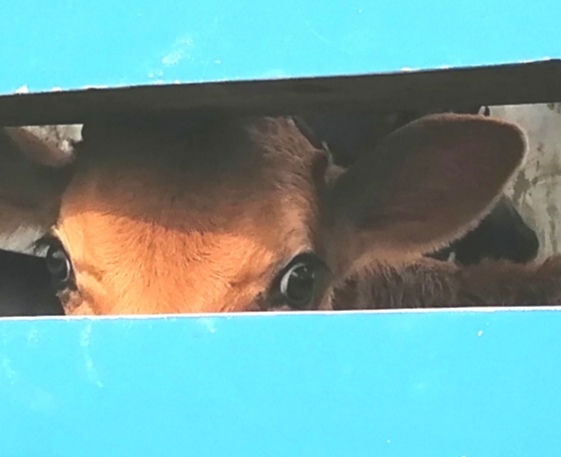 End Animal Slaughter contributor Lynley Tulloch advocates for bobby calves through her group Starfish Bobby Calf Project.     In this blog she outlines six reasons why we should give up eating dairy products.

This is a photo of a bobby calf taken just the other day in New Zealand by animal rights activist Sandra Kyle. It is an animal cruelty issue for the following six reasons:-

This calf will die traumatized. He is legally allowed to be transported for up to 8 hours, before being killed. He will find it difficult to balance on the truck floor, which is hard and caked in calf urine and feces. He may slip and fall over. He may drown in the urine as it puddles on the truck floor – I have heard first hand accounts of this from bobby calf truck drivers.

This calf will die hungry. He can legally go for 24 hours without being fed milk before being killed. He is a neonate – a mammal with a strong desire to suckle. Normally he would suckle from his mother at least 8 times in 24 hours. This natural instinct to suckle is frustrated when he needs it most.

This calf will die alone and frightened. He will die without his mother. He is programmed to stick closely to his mother’s side for safety and food. She is his lifeline. Without her, he will be stressed and anxious.

This calf will die unloved. He will be regarded in his final hours as nothing more than a waste product that needs to be disposed of. He will not be seen as a unique individual who has a personality. Instead he will join the tens of thousands of bobby calves who end their lives on concrete killing floors every week in New Zealand. Around 2 million bobby calves a year are murdered.

This calf will die for nothing. He will be mutilated in a disrespectful way when dead. He will be skinned, dismembered, and rendered into a product for human use. Those long eyelashes, the soft coat, the delicate body will become a gruesome pile of bits.

This calf has already been killed. He was likely a male calf, and he was killed between 4-10 days of age. He was a jersey, a common breed used for the high production of milk. His mother will be in the milking shed, and the milk her body produces for her calf is being siphoned for human consumption and profit.

Dr Lynley Tulloch is an animal advocate, and Lecturer in Education.