Should CCTV cameras be mandatory in slaughterhouses? 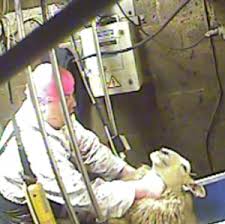 There are a number of countries around the world, including Israel the UK and France, that have made the installation of CCTV cameras mandatory in slaughterhouses.     Here in New Zealand there have also been calls for CCTV cameras. not only in slaughterhouses but also in dairy sheds.  This was in response to undercover organisation FARMWATCH’s 2018 expose, showing a Northland farmer terrorising and abusing his cows.

It is difficult to know how much of a step forward it is to have cameras in slaughterhouses.

Commenting after the UK Law was passed, Animal Welfare Minister Lord Gardiner said:  “The Government shares the public’s high regard for animal welfare and we are proud to have some of the highest standards in the world. Today we welcome the new law which requires mandatory CCTV in all abattoirs in England”.

On the face of it, it seems obvious that CCTV cameras on the farm would diminish the many horrific instances of abuse that have been captured by undercover activists around the world.   Yet a moment’s reflection shows that it also represents a contradiction in terms, just as ‘humane slaughter’ does.   For example installing CCTV cameras in dairy sheds implies that it is fine to carry on dairy practices –including AI and the removal of calves immediately from their mothers.   Putting cameras inside slaughterhouses is even more contradictory; it is tantamount to saying ‘Don’t worry about it, we’ll see that the execution is done according to the rules, and that will make it alright.’ 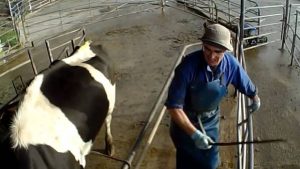 A Northland dairy farmer was caught on camera terrorising his cows,

and hitting them with a steel pipe

Except it doesn’t make it alright.    Installing CCTV cameras in slaughterhouses could have the effect of reassuring people that it is fine to kill and eat animals, and encourage them to continue.  Where is there concern for the true interests of the animals here?  As George Bernard Shaw, a vegetarian, said:  ‘If animals could talk the first thing they would say is Please Don’t Eat Me!’   No animal walks willingly to his or her death.   Putting CCTV cameras in slaughterhouses could favour the animal agriculture industry, enabling them to improve their profit maximisation and efficiency as they go about their business of exploiting and killing animals.

Ultimately, there is only one rational answer if people believe that animals matter morally, and that is to go vegan.   While promoting the use of CCTV cameras in the animal exploitation industry may be acceptable as an interim welfare measure, the clear goal should be to work towards shutting down all slaughterhouses forever.