‘Not Your Feathers, Not Your Food’ 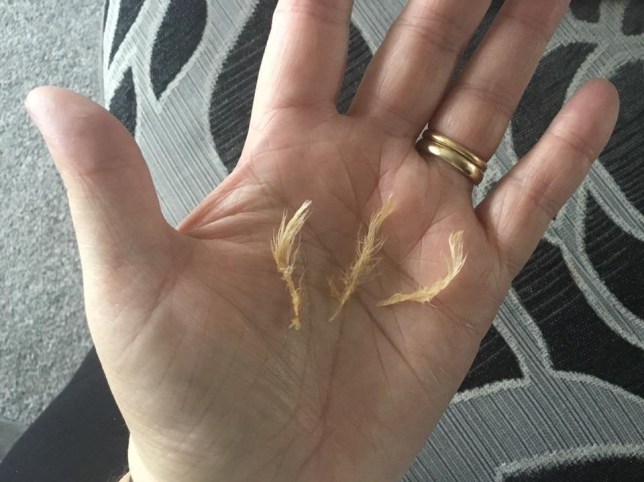 In this article End Animal Slaughter contributor Lynley Tulloch agrees that chicken feathers do not belong in KFC packets.  Neither does the chicken.  (All photos accompanying this article were taken in 2018 when activists from Direct Animal Action entered a Tegel (New Zealand) Broiler Chicken factory).

An anonymous UK mother from Blackpool who served her son KFC with feathers in it has complained to the KFC branch concerned. She also posted pictures on Facebook with the offending feathers (feature photo).

This customer was so appalled that she wrote ‘I won’t ever eat KFC again’.

I don’t get it. Chicken is a bird. Last time I looked they came complete with feathers. 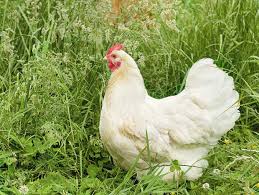 If you think your chicken should have the feathers removed before you consume them then perhaps consider what you are eating. Which, to be fair, she has – but it took the presence of the bird’s feathers to engender such outright disgust.

I’m offended as well. I’m offended for the chicken. What, seriously, do you think the chicken felt when his life was brutally ended in a medieval assembly line torture chamber?

In the UK chickens bred for their meat are killed though electrical systems or gas systems. Electrical systems involve hanging the chickens upside down on metal shackles and stunning them using electrified water. They then have their throats slit with an automated knife.

Due to individual variation in resistance to the stunning process, some birds are inevitably only electro-immobilized (paralyzed but fully conscious). They are then bled out and plunged into a tub of scalding water to remove their feathers. I guess the poor chicken in the KFC box of the UK woman just didn’t get all his feathers removed.

Chickens in New Zealand are also killed by this system of electrical stunning and throat slitting. It is notoriously inhumane, considering that many birds are not unconscious during the process and get their necks cut while paralyzed. They also may break their legs while being shackled.

If you are happy to gamble on which bird you are eating (the stunned or electro – immobilized) then hands – up I am offended. I’d write a letter, for all the good it would do me, to complain to the factories that raise (and I use that term very loosely) these birds to be killed and send them to slaughter.

And that is the problem isn’t it? Consumers get heard, they get listened to and apologies and refunds. 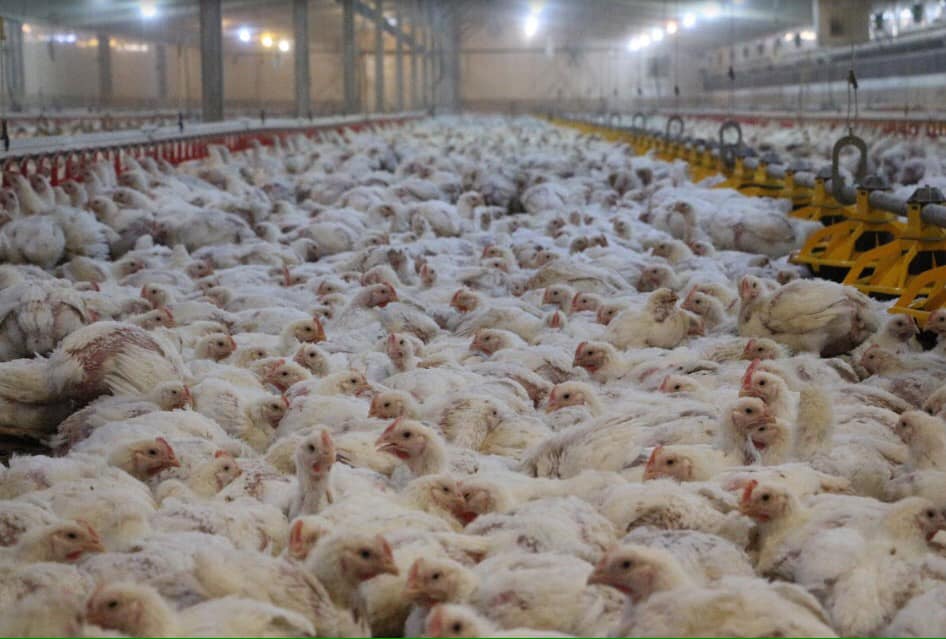 Thrown onto the barn floor at a few days old, the little chicks at first have some room to run around.   However, as they are bred to grow rapidly to reach slaughter week at just 6 weeks old they become so cramped that they can barely move.

Animal activists, on the other hand, have to actually twist themselves inside out to get footage of animal suffering, document it, analyse it to see if it breaches welfare standards – before they even complain. And they have to use their own money. And then more often than not, it does not get taken seriously. They definitely don’t get a refund. 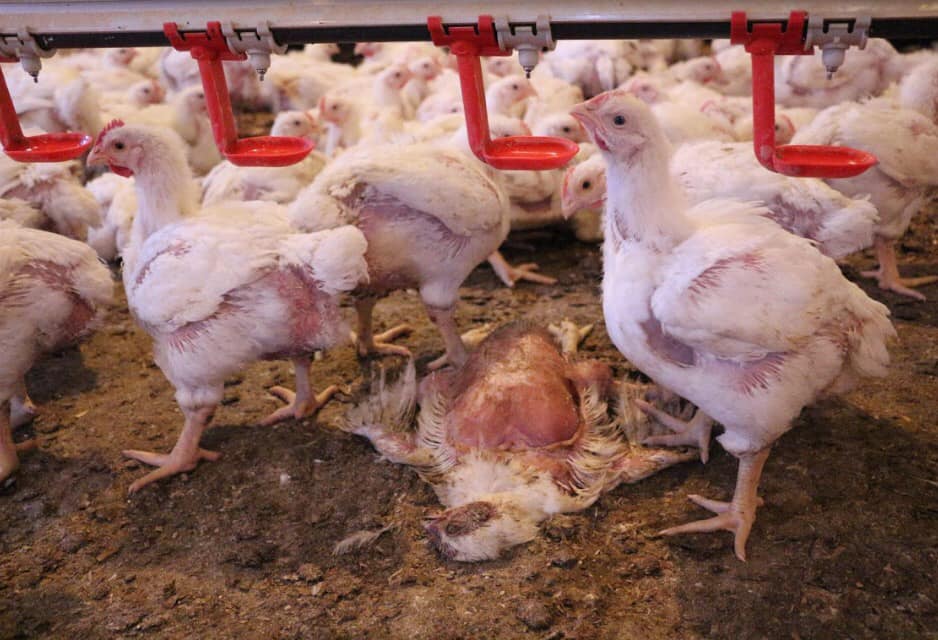 Walk into any ‘broiler’ factory farm and you will find a percentage of dead birds.  The overburdening of the birds’ underdeveloped cardiopulmonary systems often causes congestive heart failure before they reach slaughter weight.

Take for example, Direct Animal Action who investigated a chicken factory farm owned by Tegal in 2018. This farm was a KFC supplier. The investigators found countless lame chickens unable to reach water, slowly dying. Ammonia in the shed from chicken waste was so strong the activists had to wear masks. The crowded sheds housed dead and live birds together.

The Ministry for Primary Industries (MPI) did not take action against this farm. There is really not a lot I can say about that, because it is so devastating that the people responsible for ensuring the animal welfare code is adhered to choose to look the other way. But I guess that is what you get when they have a vested interest in the ongoing continuation of animal agriculture.

The Ministry for Primary Industries (MPI) did not take action against this farm. There is really not a lot I can say about that, because it is so devastating that the people responsible for ensuring the animal welfare code is adhered to choose to look the other way. But I guess that is what you get when they have a vested interest in the ongoing continuation of animal agriculture.

Basically, the suffering of chickens is a necessary evil if you want your KFC. You simply cannot raise that many animals, that quickly without factory farming them.

So yes, I am offended. Every chicken in that shed is quite literally a dead chicken walking (if they are not lame). They all have a target on their feathered backs, and live a life of misery while they wait. Well, when I say a life, I mean six weeks. These birds are bred to reach slaughter weight fast – too fast for their legs which collapse under them. 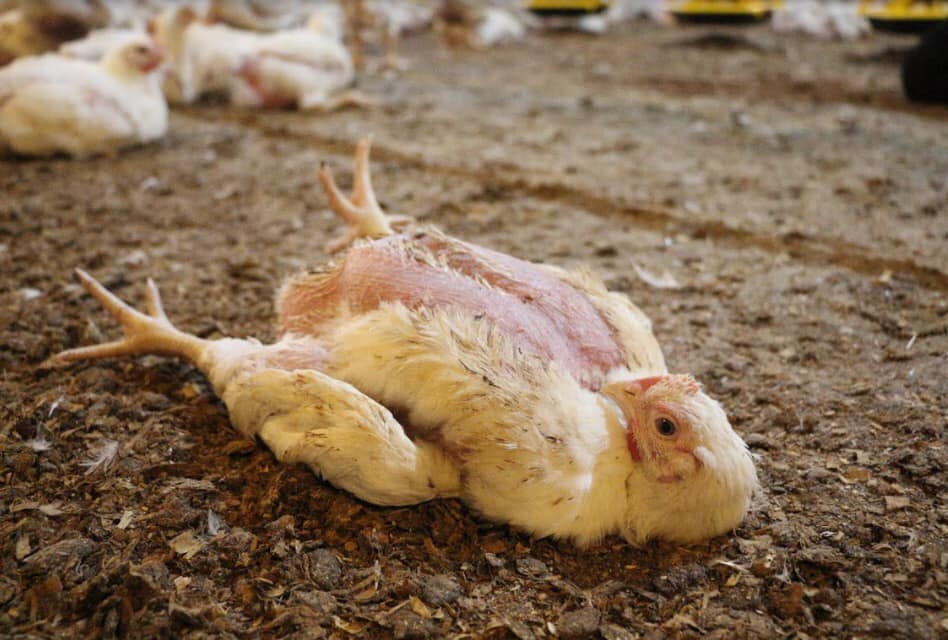 A chicken unable to right him or herself will die from dehydration, because they are physically unable to even reach the water nozzles in their sheds.

A chicken is a sentient being – meaning they have feelings including fear, joy, and pain. We may associate such emotions with humans, but our emotional repertoire is not unique to us. We have more in common with animals than we don’t. In fact, the emotional make-up of animals is very similar to that of humans.

I can’t begin to think what they are going through during their time incarcerated in a factory and the slaughter process. It’s a horror film.

So back to the UK scenario of the fried feathers. Reading further in the article it says: ‘It doesn’t meet the Colonel’s usual high standards, and it’s certainly not the reunion we want people to have with their favourite fried chicken after some time apart!’

Say, what? A reunion with fried chicken after some time apart because of lockdown? Seriously?

KFC is using this Covid-19 situation to continue their marketing line that the Colonel (who is now dead along with the chickens in the boxes) has high standards. High standards for who? Not for the chicken who hobbles around, lame from the excess weight his legs cannot support the plump juicy breasts of your favourite meal.

I remain incredulous that people can consider meat of chicken as something they have grown emotionally attached to. In reality, they are attached to the fried batter, the oils and herbs and spices. Give them a plain chicken breast and they would not be so excited.

There is nothing wrong with the enjoyment of herbs, spices, oils and so forth. This can be wrapped around a fake meat if you like. Just please leave the chickens, and their feathers out of it. 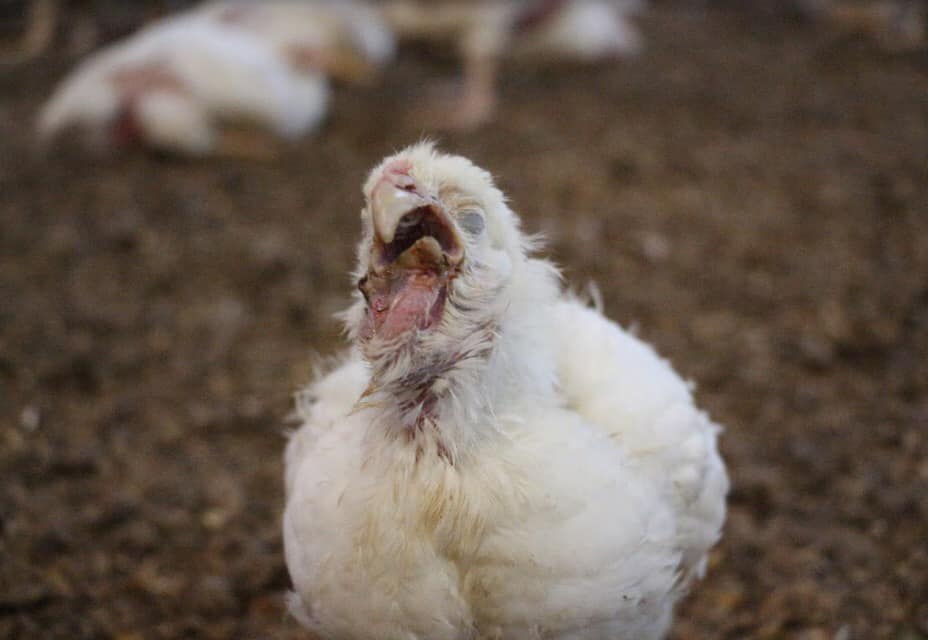 As well as lameness and heart failure, other common causes of death pre-slaughter are heat prostration, cancer—in an animal less than seven weeks old—and infectious diseases.  Ammonia blindness and ammonia conjunctivitis are eye conditions the birds can suffer from.

So to the ‘angry Mum’ in this article – get angry about the suffering of the chicken and the destruction of our planet caused by fast food outlets like KFC. Don’t be angry at the feathers. They are poignant and sad reminder that someone once lived.

They belonged to somebody. Just not you.

Dr Lynley Tulloch is an animal advocate, and a Lecturer in Education