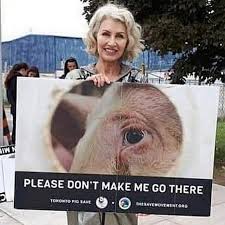 The day after Animal Rights activist Regan Russell was knocked down and killed by a slaughterhouse truck driver in Toronto, the Plant Manager at the slaughterhouse here in Whanganui, New Zealand, approached me and said: ‘Please be careful of the trucks.  Make sure you stay clear.’    I don’t have a very friendly relationship with the slaughterhouse staff, but I could see that he was sincere, and looking a bit worried.   It occurred to me that in slaughterhouse/trucking communities, the news of Russell’s death had travelled just as quickly as it had in Animal Rights circles.

It was truly shocking news.  After years of standing peacefully outside Fearman’s Pork with their signs, and offering water to panting, dehydrated pigs about to be killed, activists had lost one of their own.

Just a few hours after her tragic death, we were reading eye-witness accounts that the driver ‘had an angry look on his face’,  and had deliberately stopped in an awkward place for activists to give the pigs water.   People all over the world who do these vigils know first-hand that some drivers are angry and aggressive, using their giant trucks as weapons.  Our presence incenses them.  We hold a mirror up to their complicity in an inhumane industry and they don’t like what they see.  I have personally been yelled at and abused many times.       Once a driver swerved in close to where I was standing and opened a trap door, splashing animal feces and urine at my feet.  Once when I was photographing some days-old bobby calves, the driver suddenly reversed, then sped forward again so I couldn’t get clear photos.  If someone had been standing behind the truck, who he hadn’t seen, then there could have been a tragic death on that day too.  The recent passing of Bill #156 in Canada that is punitive against demonstrators and whistleblowers, led to some activists speculating that the truck driver may have felt ’emboldened’.   The case is still being investigated, and I hope the whole truth will come out.

It is just so very sad.  Regan Russell’s commitment to the cause was exceptional.   At 65, she had been fighting the good fight for animal liberation since the 1970s.  All over the world in The Save Movement, and in other Animal Rights groups, there have been vigils and memorials in her honour.   People have written beautiful testimonials about her character, and her selfless dedication to the cause.    The link below is one such touching article, written by an old friend.