‘Humane’ Torture – how pigs are stunned in slaughterhouses 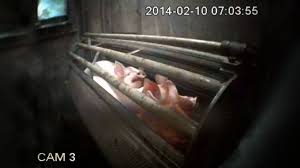 Pigs have the intelligence of a three year old child. They are curious, insightful, non-aggressive, social, and form close bonds with other individuals.  When raised for slaughter, they typically live in extremely cruel factory farm conditions.   The abuse of these intelligent and aware animals defies belief.  For example, just this week a story has come to light showing live pigs being used as crash test dummies in China.

The flesh of pigs is in high demand all over the world, and billions of pigs are killed every year for food.

In CO2 stunning, pigs are herded into a steel cage called a gondola, which is then lowered into a gas chamber. The pigs are typically frightened and reluctant to enter the gondola, so electric prods are often used to shock the pigs. Undercover evidence has shown frustrated workers frequently abusing resistant animals by repeatedly jabbing them with burning prods, sometimes holding them down while the animals scream in agony.

Once inside the C02 chamber pigs respond with panic and pain as their nasal passages burn and they cannot breathe.  They thrash around violently,  jumping over each other  in an attempt to escape before collapsing in convulsions. (Feature photograph shows a still from a video taken by Aussie Farms, in 2014).