Animal Activists Sway A Jury By Their Mercy 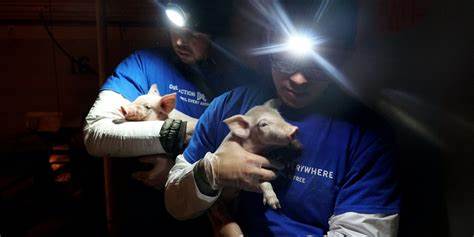 This week a jury found two animal rights activists not guilty on burglary and theft charges, setting a “powerful precedent” for the right to rescue animals.

In 2017 Wayne Hsiung and Paul Darwin Picklesimer entered a pig farm in Utah to take footage, and came out with two sick piglets.  If they had been found guilty, they faced imprisonment for up to five years each.

Hsiung, an attorney who represented himself, told the jury: “I want you to acquit us as a matter of conscience. There’s a big difference between stealing and rescue.”

The farm they entered was owned by Smithfield Foods, which raises and slaughters millions of innocent beings every year.  Pigs are sensitive and cognitively complex, yet they live lives of misery and are slaughtered in horrific ways because of the demand for their flesh.

Smithfield Foods is a ‘hog’ producer based out of Smithfield, Virginia, where millions of pigs are slaughtered every year.  As is common in companies who exploit animals, they advertise themselves as raising ‘responsible, sustainable’ products, an outrageous statement that couldn’t be further from the truth.  The Humane Society of the United States investigation into the company in 2010 revealed shocking cases of cruelty, including pigs being beaten.  In 2021 HSUS sued the company for continuing to mislead consumers about how they raise their pigs.

“They advertise themselves as raising ‘responsible, sustainable’ products, an outrageous statement that couldn’t be further from the truth”.

The Smithfield Packaging Company was started in the 1930s by Joseph W. Luter and his son Joseph W. Luter Jr.  At the outset of their endeavour they would buy 15 pig carcasses per day and sell the chopped up pieces to local businesses.   Their first processing plant was opened in 1946, where they slaughtered 3,500 hogs per day. Ten years later, their company had grown to 650 employees.

Smithfield Foods remained in the Luter family as a major player in the meat industry for decades, until in 2013 they were bought by the WH Group of China, formerly known as the Shuanghui Group.

Pork is the most popular meat in China, and as the middle class expands, the demand for pig meat has skyrocketed in that country.  To meet the demand, and save on land space, piggeries are now converting to high rises.

Chinese love pork, Americans can’t do without their bacon.  And because of this, billions of intelligent and aware sentient beings are condemned to a life of suffering, painful stunning by gassing,  and a violent death.

Smithfields show their pigs no mercy.  The verdict this week is a tribute to two activists who swayed a jury by theirs.