‘A Lamb To Slaughter’ – Short Story by Lily Carrington 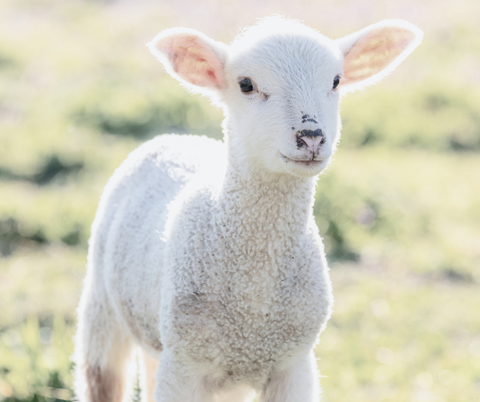 ‘Molly’ the lamb journeys to the slaughterhouse, where she watches her friend be killed.  Next, it’s her turn.

This is a story about a lamb. She doesn’t have a name, but for the sake of this narrative lets call her Molly.

Molly sits at the back of a cattle truck. She is tucked into the corner with her legs folded under her, trying not to slide around in faeces as the truck lurches and judders. The foul stench of the manure fills her nostrils and clings to her woolly coat. Feverish warmth rolls through her in waves, making her dizzy. Her thirst is accompanied by a constant ache in her empty belly. “What’s going on?” she thinks, trembling despite the suffocating heat. “Where are we going? Where is my herd?”

The scenery outside the truck changes from farmland to bush, to hills, to farmland again, but Molly doesn’t see it as it passes by. After an eternity of staring at the same poop-splattered walls and the same scared faces of fellow lambs, Molly feels the truck start to slow. She leans to the side as they turn a narrow corner, and flinches when a loud beeping sound pierces the air. The truck moves backwards then stops. The roar of the engine fades and gives way to a different, fainter noise. It’s a strange sound which Molly doesn’t recognise at first. It echoes eerily through the air. Screams, she realises. It’s the muffled sound of screaming. The realisation sends fear rolling through her and the tension in the air rises, all the lambs becoming more distressed.

The ramp of the truck is lowered and lambs scramble back towards Molly and cower around her at the rear of the truck. Someone’s hooves jab her sharply in her side. A man walks onto the truck, all business, and shoves a couple of lambs towards the ramp. They scramble down into the bright afternoon sun and into a pen. The man stomps his way towards the back of the truck, towards where Molly still sits in the corner. He shakes a rattle and Molly lurches to her hooves in fright at the loud clanging. She races after the other lambs, down the ramp and into the crowded pen, breathing hard. The lambs are packed in tightly, wool pressed against wool, hooves stumbling over hooves. Molly’s soft ears swivel constantly. Her wide eyes search those of the other lambs, seeking comfort but finding only her own fear reflected back at her.

Suddenly a cold stream of water splatters down on the lambs. Molly startles and tries to run but there’s no space to move and nowhere to go. She blinks repeatedly as the water continues to fall until it soaks through her dense coat. Her hooves splash anxiously in the shallow pool of water that now covers the concrete.

Then the lambs start to move. The one behind Molly pushes her forward as the man with the rattle starts shaking it behind them. Molly stumbles forward then manages to push her way out of the group and darts backwards into an empty space in the pen, her heartbeat thudding in her ears. She bleats and runs back and forth, confused and scared. A man walks towards her so she runs the other way, only to find another man waiting for her. She changes direction and bolts back to the other lambs. She’s quickly swallowed by the group again and there’s nothing to do but follow along with everyone else.

The metal fences that make up the sides of the pen narrow at one corner to become a kind of corridor which disappears into a building. The lambs are being herded from the pen down this corridor and inside. The terrible smell that’s hung in the air since the moment Molly got off the truck starts to intensify the closer she gets to the entrance of the building. She soon reaches the part where the pen gives way to the corridor but she resists moving out of the pen. She pushes back against the sheep behind her, trying to turn back, terrified. A large hand comes down on her rump, sudden and hard. She flies forward, bleating in panic. She follows after the lamb in front of her, recognising him as the one who stood next to her on the truck. He’s a small boy lamb from her herd, the one whose tail stump never recovered properly after they cut it off.

Soon the corridor takes them inside the ominous building. As soon as Molly enters, the smell that’s been hanging in the air gets a hundred times stronger, hitting her like a solid wall.  It’s the worst kind of smell, thick and acrid. Molly and all the other lambs know what it is and what it means, leaving them waiting in horror for what’s to come. It’s the smell of blood, the smell of death. It consumes the place like a physical thing, inescapable, and not without a fitting soundtrack to accompany it. The soundtrack of endless screams that tell of unbearable agony and terror. Now the screams of Molly’s travel companions join them in a haunting, hellish harmony.

Regular loud bangs get louder and louder as Molly’s forced further inside the building. The little boy lamb in front of her soon reaches the front of the line. Another man gently pats his behind and he trots forward. The man shuts a gate behind him.

Molly sees what happens next through the gap in the gate’s hinge. The boy lamb scrambles forward into a room and sniffs the glistening, scarlet ground. The man picks up something solid and metal and approaches the boy lamb, but he doesn’t run.

The man strokes his head and the boy lamb just stands there, shaking. Then the man gets the lamb between his legs, and holds the metal object to his small, soft head. The lamb looks up at the man innocently, and makes a quiet, pitiful little baaing sound. The man shakes his head. “Sorry sweetheart” he whispers. Then he pulls the trigger.

Molly flinches at the loud bang and watches in horror as the boy lamb falls to the ground letting out a short, choked cry. Molly looks only at his eyes. They’ve gone too wide and they stare, frozen, as his body convulses and his legs spasm on the blood- soaked floor. The man grabs him by the leg and hangs him upside down with a shackle around his ankle. Molly watches as another man brings his knife to the little boy lamb’s throat and cuts it open, the boy lamb jerking uncontrollably. She cannot tear her eyes away as blood starts to pour from her friend’s neck. The boy lamb meets Molly’s gaze, and for a split second she sees the friend she grew up with, who always liked clover flowers, who frolicked with her in the field, looking back at her with eyes wild with pain and terror before they go blank. Molly’s gaze stays fixed on his eyes as his head is chopped off and thrown in a bin where it lays amongst many other heads, and its eyes still stare, unseeing, straight back at her. 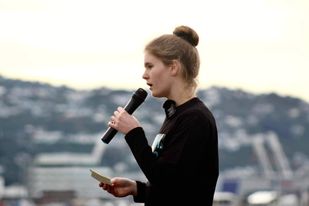 Lily Carrington is a dedicated animal rights activist who is driven by a strong sense of justice for all beings. She is fighting for a world where all non human animals are granted respect, compassion and freedom. Lily lives in Hamilton, New Zealand, with her Mum and 10 companion animals, and is a year 12 student at Te Aho o Te Kura Pounamu.