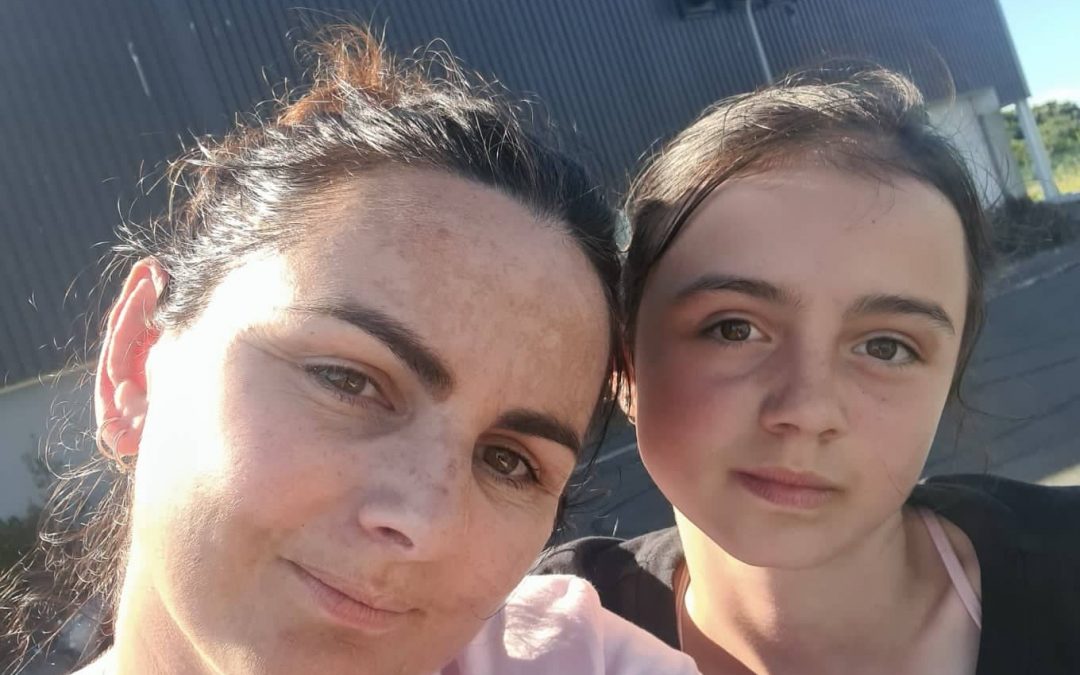 Next in our series of mother and daughter vegan activists we meet Tess and Mollie Ford.

Tess, as a new vegan, you must have a clear idea of when and why you gave up meat and dairy.   Can you tell us about that?

About three years ago my husband James and I watched a documentary on Netflix called “Game Changers”. It was a very convincing documentary mostly coming from a health point of view, and was the first time I discovered that not only was meat not necessary in my diet, but that it could even be causing me harm. More importantly, we have 3 growing girls. We are responsible for what is going into their perfect little bodies. Needless to say, we were convinced. We straight away decided to cut meat out of our diets – literally overnight – and cut down on dairy also. At this point our decision was largely based on health and less on ethical reasoning. However… I was eager to learn more. Over the next couple of years I went about my new vegetarian life, patting myself on the back and proudly declaring my moral highground wherever I went. I remember seeing the Anonymous for the Voiceless group out in central Wellington at one stage and making sure to mention to one of the activists, I was “almost there”. I continued to educate myself with all the vegan documentaries I could find, the first one being “Dominion”. Anyone who has watched this knows how eye-opening it is in terms of how animals are used and abused all over the world. Bizarrely, I didn’t at that point want to make the next step I knew in my heart I needed to. I’m an enthusiastic baker and justified my continued purchase of dairy as necessary, telling myself that what I was doing was enough. Besides, how can anyone possibly bake without eggs/milk/butter?! Yet I kept watching more and learning more about animal cruelty. My new heroes were animal activists: Tash Peterson, Joey Carbstrong, Leah Doellinger, Earthling Ed to name just a few. I remember very clearly, one evening I was sitting in bed watching some hidden camera footage of a farm where mother pigs (sows) were kept. I sat there crying and watching and crying. The switch finally went on in my head. I could no longer participate in/pay for the emotional, physical, and sexual abuse/murder of gentle, trusting, innocent, sentient beings. The 28th of August, 2021 was the first day of being vegan and I know I’ll never look back.

You have not imposed veganism on your children, but Mollie made her own decision to go vegan, is that right?

I have not shied away from showing my girls some footage of what happens to animals, as well as discussing it. I don’t believe it’s okay to lie to kids about something so violent that they unknowingly are too, participating in. When I became vegan I became intensely passionate about it overnight! However, the girls when out and about with friends and absolutely had the choice to continue eating meat or dairy. A few months ago, Mollie, my oldest, who was 12 at the time,  just came out and said she was ready to “go vegan”. She had watched and learned enough that she was ready to make that choice. I had made sure to say to the girls, it is a commitment. I didn’t want them to be people who would say they were vegan “most of the time”. In my view, it’s all or nothing. I know that when they say they’re ready, it means they absolutely are. 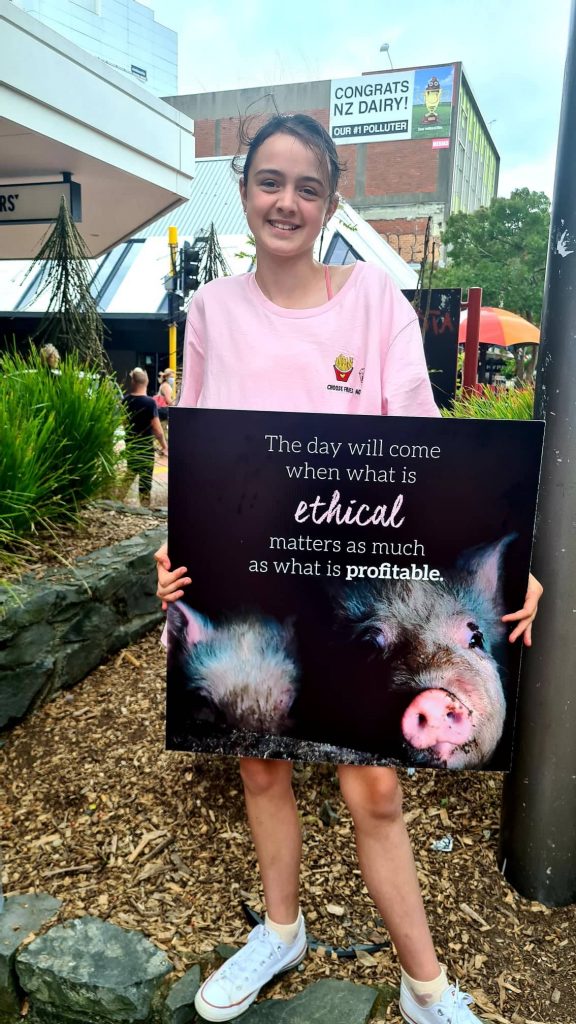 You and Mollie are now definitely vegan for the animals.   What kind of animal rights actions have you done together?

Mollie has come to two vigils with me to a Whanganui slaughterhouse where we have bore witness to animals before they are sent to slaughter. We have also joined Anonymous for the Voiceless in Wellington,  and participated in a Cube of Truth together, as well as “Make the Connection” outreaches. In our day-to-day life we do small things whenever we can for the animals. The area we live in has a lot of bush and farmland. When we are out walking, we often stop and spend time talking to and loving on the sheep, horses and cows. We are preparing for our first hen liberation and hope to create a home for them with us. This is just the beginning for us I’m sure!

You must have been proud of Mollie when she told you she wanted to go vegan.   What else about Mollie’s advocacy for animals makes you proud?

Mollie has had some kids at school make some ignorant and quite frankly revolting comments over the last few months. I am proud that although she is shy by nature, she has been learning to stick up for herself and her morals in a tactful way. I’m extremely proud of the fact that she is so intentional with her vegan journey. She is diligent with checking the backs of packets at the supermarket and is adventurous with trying new foods! I have an Animal Save hoodie which Mollie proudly wears everywhere.  She is an inspiration to me.

Thankyou for your time Tess!