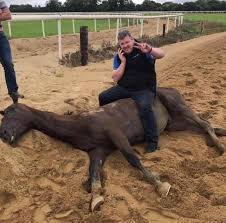 A bizarre (for some heartbreaking) photo and video of two separate incidents surfaced this week, delivering a grievous blow to the horseracing industry. The photo was of top Irish trainer Gordon Elliot sitting down on a newly dead horse while talking on the phone and giving the victory sign. The video showed Irish jockey Rob James climbing on the back of a dead horse and laughing as he pretended to ride it.   Both horses had been pushed until their hearts went into cardiac arrest, and would have experienced a painful and distressing death.

Both trainer and jockey have been stood down from competing in Great Britain pending an enquiry, but whatever the outcome this has damaged the public perception of the industry.  Horseracing enjoys social licence largely because the public believes the horses are loved by their trainers, owners, riders and grooms, who treat them ‘better than their own children’, as is often said.   However the behaviour of this top trainer and jockey seems to tell another story.