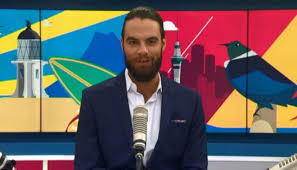 Gandhi once said: ‘First they ignore you, Then they laugh at you, Then they fight you, Then you win’.    As the vegan movement continues its unstoppable march into the mainstream, it is predictable that the backlash will grow.  This can be seen in more and more hateful comments from minor media personalities and self-publicists, and also online.  The positive spin on this is it’s a sure measure of how far we have come.  The vegan movement is no longer ‘fringe’, it cannot be ignored, and is no longer a laughing matter.   The movement has arrived at Stage Three in Gandhi’s progression:  ‘Then they fight you’.  Next is: ‘Then You Win’.

In today’s featured article, End Animal Slaughter contributor LYNLEY TULLOCH addresses the comment by a Radio New Zealand breakfast television host that vegans should be locked up for ‘economic treason.’  As she shows, his comment completely misses the point.  The vegan movement cannot be defined by tradition,  economy, or a dietary choice.   It is much more than all of these.   Veganism is a social justice movement defined by ethics, compassion, truth and human decency.