From Dingley Dell to Hell: The Ethical Pork Myth 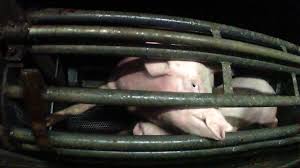 There is no ethical way to kill an animal who doesn’t want to die, writes End Animal Slaughter contributor LYNLEY TULLOCH

The slaughterhouse is something many of us would like to pretend doesn’t exist. It sits, ghastly and imposing, behind high walls. It represents the interface between life and death; a breathless and relentless killing machine.

Restaurant entrepreneur and chef Allegra McEvedy expressed this discomfort in an article she wrote for The Guardian in 2014. McEvedy wrote, “I’m fine with dead animals, but the point at which animals cross from living to lunch is one that makes me wobble a bit”.  McEvedy set up a ‘pork-focused’ or ‘pig based’ restaurant in 2013 which aimed to source pig meat sustainably, and “venerate the pig in all its manifold glory”. The restaurant closed in 2016, but not before many pigs lost their lives in a bizarre act of supposed veneration.

Veneration is a strong word. It means to worship and respect. I am not sure how McEvedy can claim that using a pig’s very flesh for food, and to profit from that, is synonymous with veneration.

We see this kind of hypocritical attitude regularly. It fits squarely in the welfarist camp where the animal unknowingly trades their life (by way of humane slaughter – an oxymoron) for being bred into existence and cared for. The animal has a good (albeit short) life while the person gets their pound of flesh.

The human gets to have the animal’s body and eat it too. It’s just – well, they would rather not see the life being taken. No one wants to do that, not really. Some people try to transcend this discomfort by deciding that if they can take an animal’s life or witness the slaughter of said animal then it justifies the act. We’ve all heard it being said before – “I won’t eat it if I cannot kill it myself.”

To return to McEvedy, she visited the pig farms where the pigs for her restaurant were sourced from. She cuddled day old piglets at Dingley Dell (I kid you not) specialized outdoor farm. She thought about her values of high animal welfare and integrity. And then she decided to tour the slaughterhouse where the pigs were to be killed. As she said, this was her first visit to a slaughterhouse despite being in the food business for 20 years.

The slaughterhouse was called Burrow’s Abattoir, a mid-sized independent outfit.  It’s the place that Dingley Dell sends pigs to be killed. It kind of sounds like a children’s book, a Disneyland version of happily ever after.

The slaughterhouse was called Burrow’s Abattoir, a mid-sized independent outfit.  It’s the place that Dingley Dell sends pigs to be killed. It kind of sounds like a children’s book, a Disneyland version of happily ever after.

Except it wasn’t. McEvedy describes how the slaughterhouse killed 4,000 – 4,500 pigs a day. They kill them by putting them in gas chambers after being ‘trotted along in single file up a ramp’. McEvedy says she can hear squeals, but she also concedes that pigs are notoriously chatty and she doesn’t really think they are distressed. The pigs enter a chamber of highly concentrated CO2 and after 90 seconds are dead.

The 90 minutes is debatable. There is evidence that pigs may suffer for several minutes in agonizing pain.

That’s it. McEvedy is now happy to move along the chute to the blood-letting area satisfied that she is still in Disneyland. The pigs however, are being hooked up, bled out and split in two and their innards (grey with a hint of mauve according to McEvedy) are released.

And of all this, McEvedy says she feels more a sense of awe than of disgust. She writes, “I can feel my eyes widening and over the next hour I am aware they’ve taken on a look somewhere between intently engaged and slightly demonic”.

Her words, not mine.

And of all this, McEvedy says she feels more a sense of awe than of disgust. She writes, “I can feel my eyes widening and over the next hour I am aware they’ve taken on a look somewhere between intently engaged and slightly demonic”.

Her words, not mine.

There is something disquieting about the sense of awe and enjoyment some people get from watching animals being killed. Not everyone cares that animals suffer, or that their lives mean nothing more than a bacon sandwich. The human mind is capable of twisting reality into shadows that obscure the truth.

Before you buy into the line of ethically sourced, sustainable meat it is important to disperse the shadows. What McEvedy did not say in her article is that pigs suffer horribly in gas chambers. There is a myth that gas chambers are humane. The pigs struggle for air and convulse before death. Undercover footage reveals the harrowing reality. When the pigs inhale their lungs, eyes and mouth become acidic and they burn from the inside out. Their squeals are harrowing, and not the kind of ‘chatter’ one would associate with pigs socializing.

Carbon dioxide gas chambers are not a happy way to end a pig’s life.

Instead of a Disneyland fairytale of happy ever after, these pigs go from Dingley Dell to Hell. 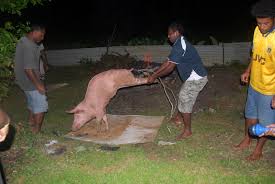 Shortly after she wrote this article the author, currently in Fiji, heard the bloodcurdling screams of a pig being slaughtered in a back yard.   It left her shaking, and unable to forget what she had heard.  (Internet photo).

The conflict between instinct and intellect in exploiting animals

Voices for Animals Across the Years: Richard Ryder