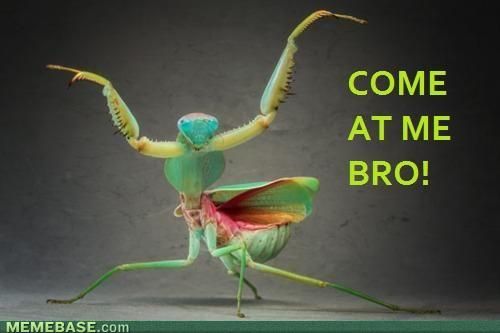 When I moved into my new home just over a year ago I discovered that I had company.   Waking up at night and going into the kitchen I would regularly see at least one or two tiny cockroaches walking over the bench.   When I approached them they momentarily froze, then ducked for cover.

If observed behaviour is any indication, then it is reasonable to assume that my houseguests were feeling fear.  The questions must therefore be asked: if they can feel fear, then is it not reasonable to suggest that they can experience other emotions also?

Charles Darwin thought so, writing in his book   The Expression of Emotions in Man and Animals that insects “express anger, terror, jealousy and love.”   The idea didn’t catch on however, and 150 years later, studying insects for intelligence is still an under-developed field.   The science of Entomology has been established for centuries, but until recently investigators concentrated on insect taxonomy and physiology, and how populations related to environment and agriculture.  Their behaviour was studied, but it was assumed to be ‘instinctive’, not intelligent.  Proposing to study insect intelligence and emotions would have gotten former generations of scientists laughed out of town.

Insects are not the easiest organisms to study however, let alone relate to, as they are so different to us.  They can be defined as ‘small invertebrate animals with an adult stage characterized by three pairs of legs and two pairs of wings’.    They are segmented, modular, and their nervous system is planned along decentralised lines.  An insect has many different sub-brains in different parts of its body, which feed into and can be controlled by a central brain but can also function separately. Even if the central brain of an insect stops working, so long as the leg sub-brains are intact, they can keep walking.

Since entomologists have been turning their attention to insect intelligence they have discovered problem solving, advanced communication, social skills, adaptability, and memory.  For example researchers from the University of Oxford’s Centre for Neural Circuits and Behaviour showed that fruit flies take longer to make more difficult decisions,  suggesting they ‘think before they act’.  Bees, when offered a reward from a perch of a certain colour, will return first to perches of that colour.   Bees are famous for the ‘waggle dance’, first described by Karl von Frisch.  When they have located a source of food bees return to their hive and through a complicated series of manoeuvres transmit the location and route to their mates, who then fly off to gather the food. 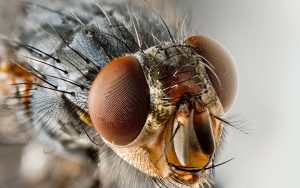 Evidence is also emerging that so called ‘lower animals’ such as worms, can experience pain and suffering.  One striking example of this is the presence of hormone levels.  For example, just as certain hormone levels can validate the presence of pain in humans, when an earthworm is injured, its nervous system secretes an opiate substance that has the role of attenuating pain.

We humans are the indiscriminate Dispensers of Death to every other life form on the planet, including insects.  We kill billions of them every year largely through insecticides, and this has led to a massive decline in insect numbers.  Older citizens wonder what has happened to all the butterflies, bees, wasps, praying mantises, moths and dragonflies that used to be so common in their youth.   Insects pollinate blossoms, perform scavenging roles, and recycle nutrients back into the soil.    Their annhilation is just one part of the ‘sixth mass extinction’ currently taking place, brought about by human overpopulation, overconsumption, and wanton disregard for the rights of other species.

The jury may still be out on the true nature of insect intelligence, and their ability to feel (as opposed to ‘demonstrate’) emotions.  But if we are appalled at the thought of deliberately hurting sentient beings, then our annihilating thumbs and trigger fingers would do well to give insects the benefit of the doubt.    If you stick a cockroach with a pin and see it writhe, it is not unreasonable that it is feeling not only pain, but also negative emotions.

Fortunately, my cockroaches are in no danger at all of that.