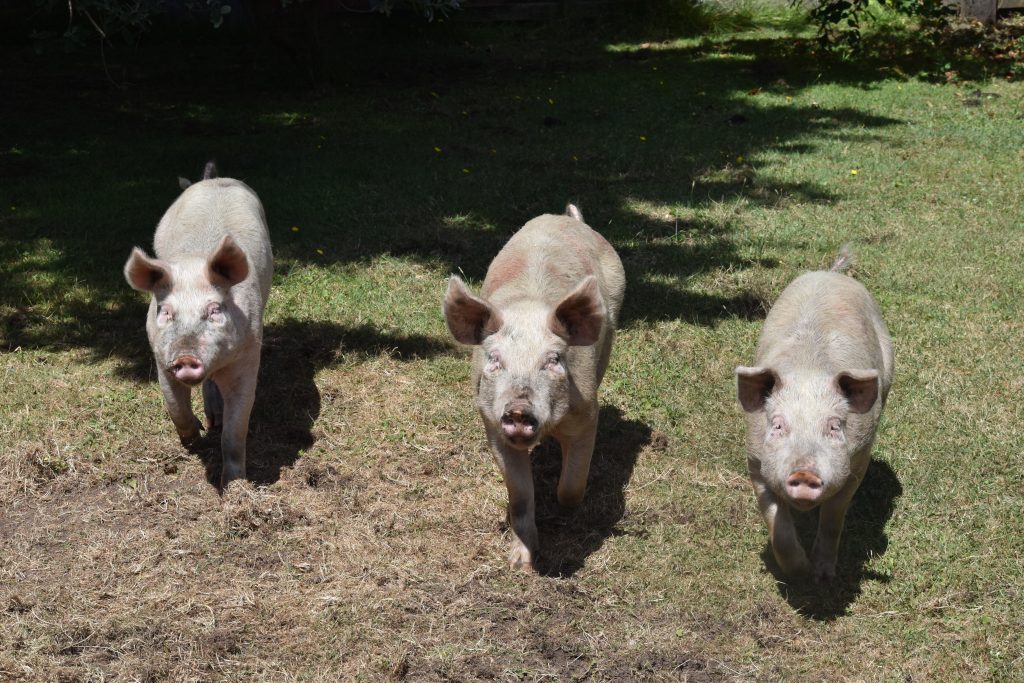 A new study from the University of Denmark has shown that the oinks, grunts and squeals of pigs are aligned to their emotions.    End Animal Slaughter’s Sandra Kyle is not in the slightest bit surprised.

I am an Animal Rights activist, a ‘townie,’ with little experience of farm animals outside of bearing witness to them at slaughterhouse vigils. A little over two months ago I heard about three pigs who were being sold for slaughter, and purchased them to save their lives.  Confident we would find a sanctuary for them, I planned to keep them on my property in the meantime.  It has a secure back section with plenty of shade provided by a majestic native totara, and established quince, apple and orange trees.  I had also recently planted some peach and feijoa. In mid summer there was little grass growth, and I knew it wouldn’t be large enough for them long term, but was satisfied it would suffice until I and a group of friends supporting them had found them a permanent home.  After canvassing around for suitable names, I decided to call them Happy, Lucky and Hope. 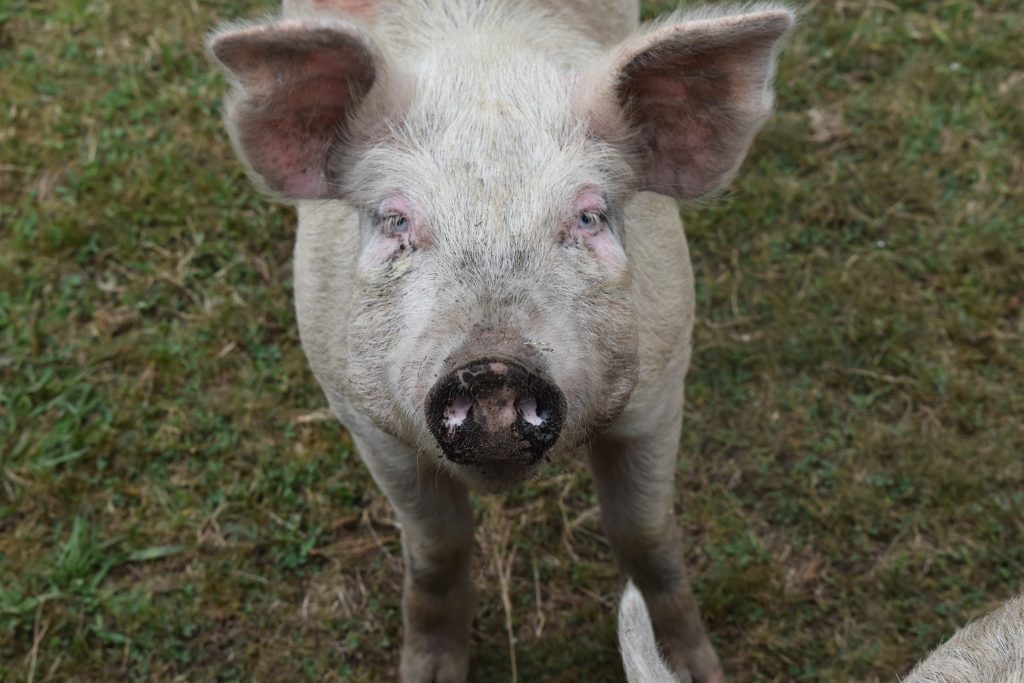 Happy
During the five and a half weeks they spent with me I came to know their different personalities.  Hope, the girl, was shy and sensitive.  Happy, the larger of the boys, was cool and detached.  Lucky was the most boisterous and vocal of the three.  I came to recognise their different patterns of grunts and squeals, that changed according to their circumstances and ranged from enthusiastic to snappy to distressed.  If I could translate them, it would be something like:-
‘Hey guys, here she is with food’.
‘Get Out Of My Face!’
‘That’s mine, you’ve had yours.’
‘I’m itchy’
‘This feels good’
and ‘They’ve died!’
The latter is my interpretation of what Hope said the day her two brothers were castrated.   A friend and I watched as the little girl went to and from her brothers, trying to wake them, finally going to lie under a tree.  When I approached her she looked straight at me and I’ll never forget her response, that we both witnessed.  Breathing heavily between broken sounding grunts, it seemed for all the world as if she was telling us a story, the way an upset child would try to explain something between sobs.     My friend and I both had the feeling that Hope was crying because she thought her brothers were dead. 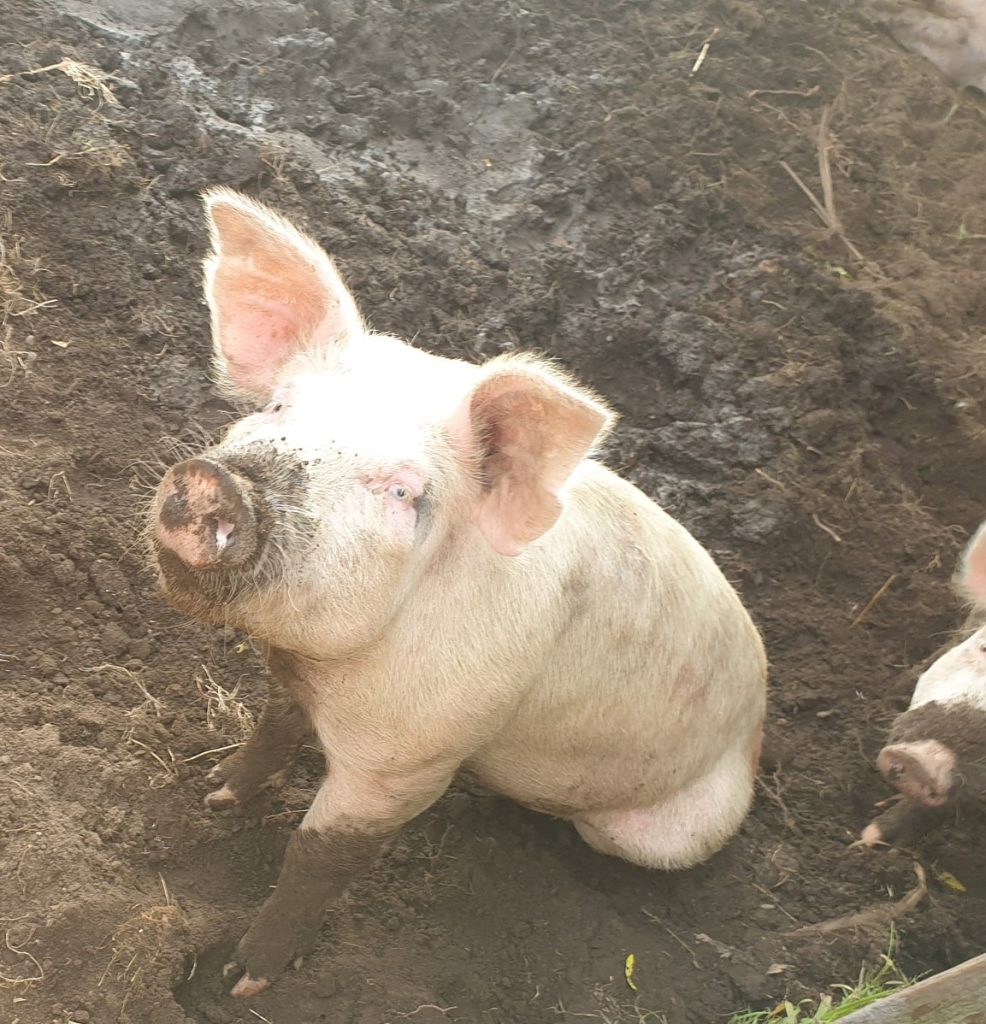 My experience with my pigs means I was unsurprised to read a scientific study has demonstrated that a pig’s grunts, oinks and squeals have specific meanings.  The study, lead by Professor Elodie Briefer of the University of Copenhagen’s Department of Biology, used thousands of recordings gathered throughout the lives of pigs, from birth to death.  The Danish researchers are the first in the world to translate pig emissions into emotions.

You can read the Metro UK article here:

Happy, Lucky and Hope were with me for five and a half weeks before going to the Huha Sanctuary in the lower North Island.  I am grateful to friends in the vegan community who helped to raise money that covered their vet bills and rehoming costs.  I have received videos of them in their new home. My little piggies are becoming enormous, and appear to be thriving in the huge paddock they share with other pigs and goats.  They also have a million dollar view over the Hutt Valley, that turns into a vision of twinkling lights by night.

As someone who has on innumerable occasions lay in bed after a vigil, the sound of screaming pigs ringing in her ears; as someone who cannot banish the image of panicking pigs turning on each other in the slaughterhouse truck; as someone who has experienced first-hand the heartlessness of humanity to intelligent, sentient beings, I was determined I would do everything I could for ‘my babies’. 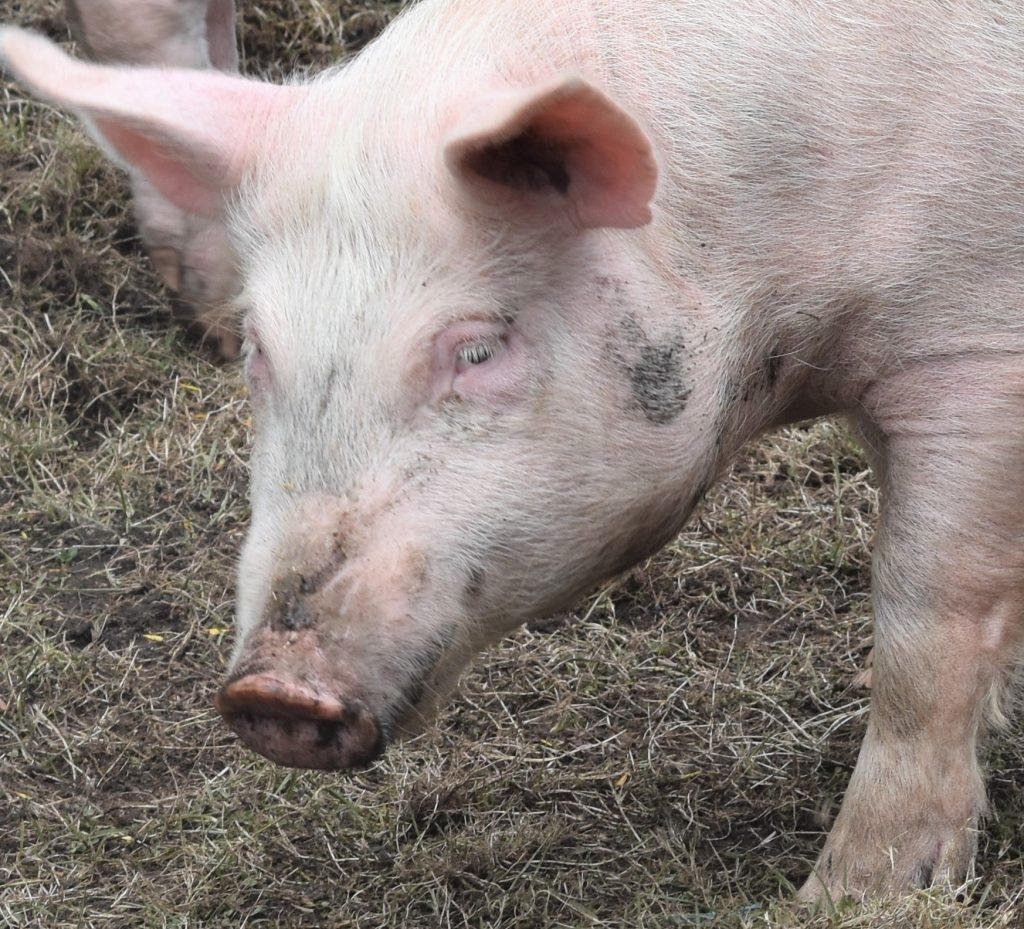 Hope
I think of Happy, Lucky and Hope as symbols of a kinder, gentler world to come, a world that will see the deliverance of all animal kin we so mercilessly exploit, torture and kill, in the trillions every year.  The fact is that all animals communicate, we just don’t care to listen deeply enough.

Sanctuary: This is What Matters – VEGAN VOICES writers Pete and Kit Jagoda