More Pigs Boiled Alive in Slaughterhouses If Proposal Goes Ahead 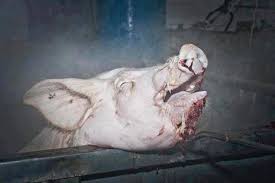 In January 2018 the United States Department of Agriculture announced its proposal to ‘modernize’ pig (‘swine’ or ‘hog’) slaughter. The programme was designed to greatly increase slaughter line speeds and also to reduce the number of trained USDA meat inspectors at slaughter plants.

Opposing this move were workers’ unions, public health officials and animal welfare organisations.   Despite this, USDA planned to go ahead with rolling out the programme to a handful of slaughterhouses collectively responsible for killing 90 percent of the nation’s pigs.   Just this week however, Congress announced that it has forced an investigation into whether USDA used flawed data to downplay worker safety issues, and the programme has been delayed.

Compassion Over Killing’s Scott David worked undercover inside Quality Pork Processors (WPP), which was killing 21 pigs per minute under the high speed pilot scheme.  He documented pig carcasses covered in feces and abscesses, workers under intense pressure to keep up line speeds beat, pigs being dragged and electrically prodded to make the terrified animals move faster.

In her groundbreaking book ‘Slaughterhouse’, animal cruelty investigator and prize-winning author and journalist Gael Eisnitz documented pigs being dropped into vats of boiling water (designed to remove the hair off the pig’s skin) when they were still conscious.   When line speeds are increased it puts the workers under extreme pressure of injury and stress. and more animals are improperly stunned or ‘stuck’ (killed).  Like the pig in our feature photograph, they may die agonising deaths, drowning in boiling water.

When will the insane cruelty end?  We need to begin the work of closing down slaughterhouses.  There is no place for them in civilised society.